What Good is Having Kids If They Can’t Do The Cooking? 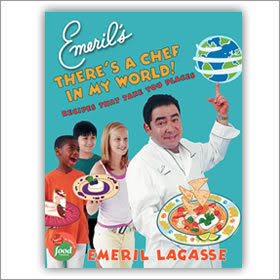 I love celebrity chefs, but recently I discovered (the hard way) that some of the bold-faced Food Network names out there write books which are more self-promotional vehicles than useful kitchen resources.
And then there’s Emeril Lagasse who, besides having bowled me over at now four of his nine restaurants, absolutely maintains his reputation with utterly fantastic coookbooks.
Emeril has just followed up his kids’ cookbook, There’s a Chef in My Soup, with There’s a Chef in My World: Recipes That Take You Places. Each colorful page takes kids on a culinary tour around the world–but don’t worry, there’s no scary foreign fare to be found. Just mildly adventurous family-pleasers like Moroccan couscous, Jamaican Jerk Chicken and German Apple Pancakes. If the recipes themselves aren’t enough, the cultural factoids and humorous illustrations that accompany each one that will really get kids interested crushing the chips for the Mexican Tortilla Soup or cracking the eggs for Toad in the Hole.
Don’t worry moms, the book doesn’t send your kids running amok with meat cleavers. There are icons indicating which recipes require extra supervision, sharp obejcts, potholders, and even the handling of raw poultry.
I can only hope Emeril will follow this one up with a book that gets kids as eager to do the dishes. –Liz
Tags: cookbooks, diy, gifts for teens + tweens