Shake things up with great new music from The Not-Its! 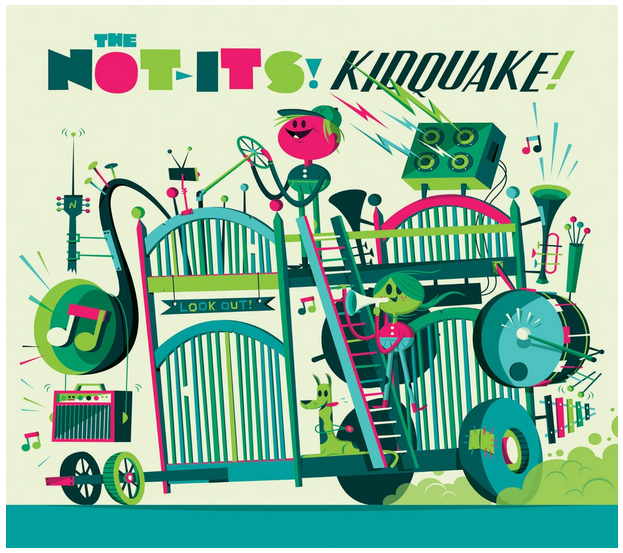 If there’s a month when I need to shake things up around here, it is February. Summer seems so far away, the fun of the holidays is over, and we’ve got a serious case of the blahs.

As if arriving on cue, the crazy cats who make incredibly authentic indie music for families have just released their fourth CD…and it’s my favorite one yet.

[Keep reading for a chance to win a copy of this great new CD!]

What I have loved about Seattle’s The Not-Its! from the first time I heard their debut CD, We are the Not-Its!, is how much their music really rocks. And on their latest, Kidquake!, they pull no punches, satisfying that indie-itch for parents like me who value a reasonable bedtime too much to hit the clubs anymore.

Anchored by the kick-butt voice of Sarah Shannon of 90s Sub Pop band Velocity Girl, and with the driving beat of drummer Michael Welke, formerly of Harvey Danger, this band of five sounds tight and powerful on this release.

Kicking off with Danny Adamson’s rhythmic guitar, the title song is all about kid energy–power that I hope to channel into their cleaning their rooms, not organizing a coup. Though with a line like We may be small/but we are strong, I may have to forgo the kale smoothies for a week.

Let’s Skateboardwill have them dreaming of the snow-free ramps of spring, while the unlikely favorite for this arachnophobic, Tarantula Funeral, has me singing an ode to a crawly classroom pet. Lyrics are definitely aimed at those who can already get around on their own two feet, though I would’ve loved to have had this CD back when my pre-walkers went through their depressing Barney phase.

The CD closes with a love song, but don’t expect a quiet lullaby to sing your kids to sleep. Instead The Not-Its! give us a pretty rock’n’roll timeout in four-part harmony that sings us out with The Not-Its love you…and we love this CD right back. –Christina

Download a copy of The Not-Its! Kidquake! from our affiliate Amazon, or wait a few more days for the CD release on the 19th.

Congratulations to Jennifer W! She won a copy of The Not-Its! Kidquake! CD.