Painting For Peace in Ferguson: A children’s book with a message of hope and community 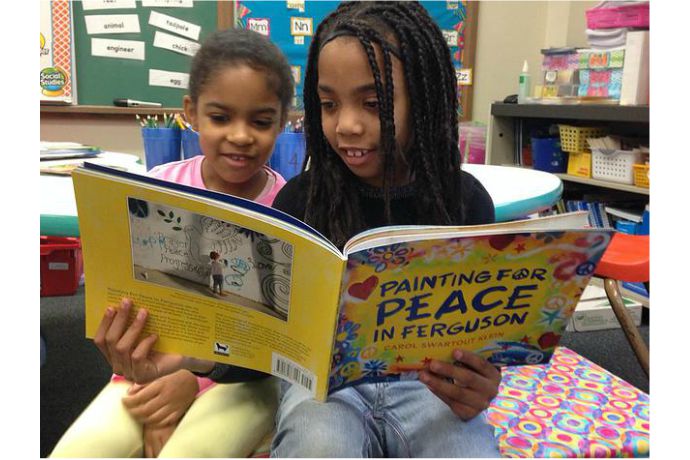 This past Sunday, August 9, marked one year since the death of Michael Brown and the subsequent uprising in Ferguson, Missouri.  Despite the many months that have passed, trying to make sense of the heartbreak and horror of everything that’s happened in this country recently remains a challenge for so many us. Processing the racial injustice, the hate, the death and devastation is difficult, to say the least.

And as parents trying to explain any of it to our children — so many of us don’t even have the words.

This is where the children’s book Painting for Peace in Ferguson can help. Written by Carol Swartout Klein, who grew up in Ferguson, the colorful book tells the true story of locals — artists, volunteers, citizens — coming together to rebuild their community, using a paintbrush. Since its publication back in February, the book has sold nearly 2,000 copies and won an IPPY (Independent Publisher’s award) this year, the Outstanding Book of the Year Award Gold Medal.  And we can totally see why.

Written in child-friendly verse, the book features moving photographs of the actual artwork painted on hundreds of boarded up windows and torn-up buildings in Ferguson.

After watching what was happening in her hometown, Klein said she was inspired by one of our favorite Mister Rogers quotes, about how to talk to children when scary things happen:

That’s the aim of the Painting For Peace in Ferguson: to amplify the important message that we can all make a difference, and that even in times of sadness and chaos, we can find and built on hope.

The Painting in Peace website also offers tips on how to talk to kids about what happened in Ferguson and about civil unrest in general, as well as providing teacher resources and links. Plus, net profits from the sale of the book will benefit Ferguson-area youth and art programs which sounds like an outstanding cause to support.

Painting For Peace in Ferguson is available at local St. Louis bookstores and on the book’s website in both hardcover and paperback.

Contributor Nicole Blades is a prolific author, journalist, gadget junkie, and committed dSLR evangelist. She lives in CT by way of Brooklyn by way of Canada which means she's not only cool, she's very polite.
Bio