Schoolhouse Rock is back! (Well, just for one night) 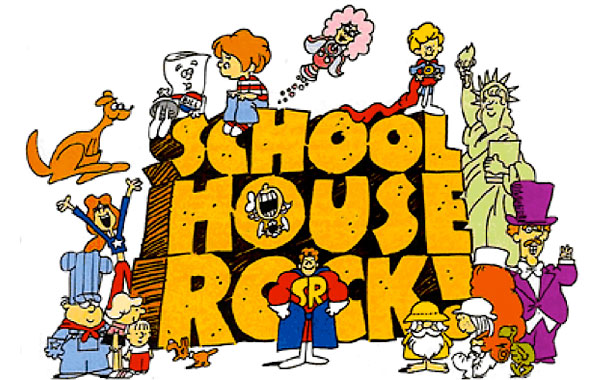 For those of you who slept through the 70’s, just entered the country, or–gulp–weren’t born when they originally aired, Schoolhouse Rock‘s catchy, educational, and campy videos helped me learn everything from the Preamble to the Constitution to my 5 times tables on Saturday mornings in between my favorite cartoons. They were brought back briefly in the 90’s with some new songs and again in the 2000’s with Earth, though I’m one of those ‘Rock fans that has strong opinions about the 70’s tunes being the best.

During this special feature,  there will be tons of fun trivia and insider info from the creators. Plus, the age-old debate, What is the Best Schoolhouse Rock song of all time? will evidently be settled once and for all.

My vote? Sufferin’ Till Suffrage, with Interjections! as a close second. Liz’s favorite Schoolhouse Rock picks can be found here including Unpack Your Adjectives, shown below.

[Ed note: Come on! “He was a hairy bear…he was a scary bear…we beat a hasty retreat from his lair.” Best rhyming educational lyric ever!  -Liz]

So, mark your calendars and set your DVR’s for Sunday, September 7th at 7pm to see the homage to Schoolhouse Rock on ABC. You can be sure that I’ll be singing along from beginning to end — and our kids might even be learning.

Check your local television listings for  The ABC’s of Schoolhouse Rock running on Sunday, September 7th on ABC.