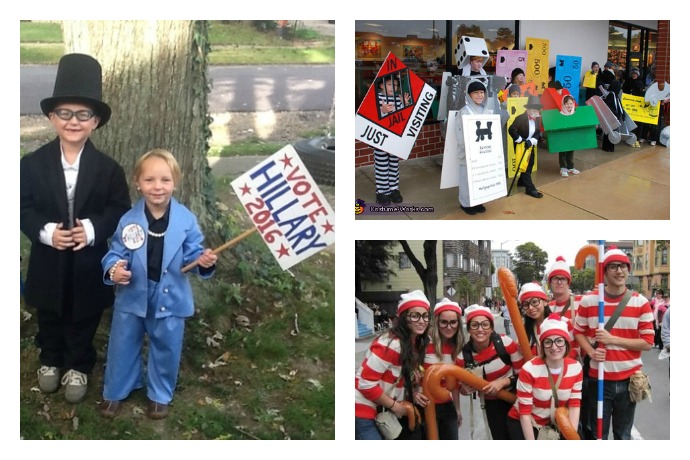 Once your kids get too old for our awesome Baby Halloween Costume ideas, they may want to come up with a group costume that involves their friends, as is the case with my own kids this year.  So gather them around the computer–or just send them the link to this post–and show them some of these really cool ideas for the coolest and most creative group Halloween costumes for kids. Hope they inspire something wonderful.

Perfect for those ever-texting tweens, though they may argue over who gets stuck being Facebook.

If your kids already love building with LEGO bricks, hopefully they can build their own costume too.

Remember when this is what actual film looked like, and not just a filter you used sometimes? Also, remember actual film?

A kale smoothie costume just wouldn’t be as fun. Truth.

Unless you are super-skilled at painting, these printable Minecraft costume sheets at Spoonflower will make this idea doable.

Your politics may dictate whether Hillary is part of the group or not but we find it hilarious. Pants suit and all.

Though there are dozens of pieces you can make from poster board, I think the little jail square is a must.

Just make sure they line up in descending order; it doesn’t quite work as well when everyone is the same size.

At least they’ll know how to shoot it out if they can’t agree who gets the last Milky Way.

Remember: Only one can be the real Waldo. Ha.

Finally, a costume with some bite. Sorry, couldn’t resist.