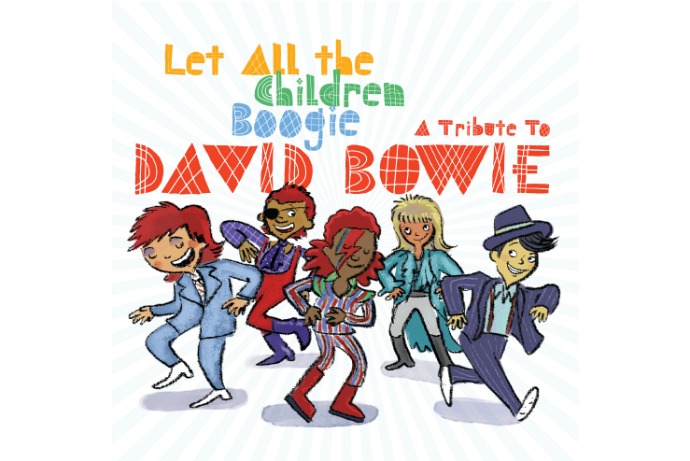 If the impromptu dance party my girls and I broke into at the dinner table last weekend is any indication, Spare The Rock Record’s soon to be released album Let All The Children Boogie: A Tribute To David Bowie is going to be a huge hit with families.

Whether you’ve been a long time David Bowie fan or you re-discovered his greatness when the world lost the amazing talent last January, Bowie’s music and message speaks to children and adults alike. Even the youngest of tots can’t keep from grooving to great music, something we talked about with Lisa Loeb in a recent Spawned podcast.

Spare The Rock Records knows this too. They have gathered together some of the best in the kindie and indie music industry to create an all-ages cover album featuring 20 songs to introduce Bowie to a new generation.

Related: Cool music gifts for the tween or teen who actually knows who Bob Dylan is

Standouts on the album include Space Oddity by Gustafer Yellowgold. Known for his trippy, out-of-this-world music, Gustafer manages to create a spacier, simplified, and very cool version of the hit.

Elizabeth Mitchell, and her family band, You Are My Flower, do an awesome version of Changes. On another track, she and her now teenage daughter Storey sing a lovely version of Life on Mars.

And I dare you to fight the urge to boogie to Let’s Dance by Antibalas, a Brooklyn-based Afrobeat/Jazz ensemble. (It’s near impossible; you’ve been warned.)

In addition to the great music and fun cover art by children’s book illustrator Jarrett J. Krosoczka, I love that proceeds from the record will benefit the It Gets Better Project — an organization that helps LGBT youth deal with difficult issues in their lives.

Let All The Children Boogie: A Tribute To David Bowie will be available on November 18, but you can pre-order on Amazon or on iTunes.

Georgette Gilmore is a NJ based writer, social media junkie, food lover, avid reader, TV bingewatcher, and mother of two adorable Gilmore Girls. She currently writes about family travel on her blog, Playground, and works as a social media manager for local town events. When she's not bingewatching. Of course.
Bio
Twitter
Instagram