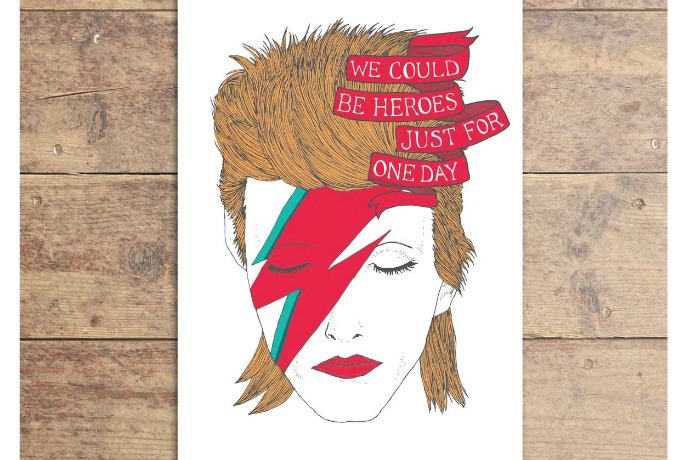 We’ve had conversations around here from time to time about musical artists, and the few of them who are able endure over time, even managing to evolve and experiment and remain relevant for four or more decades. David Bowie is easily on that list for us and we were all pretty devastated to learn of his passing today at just 69.

I know that some think it’s strange to cry for “a celebrity” you never personally knew; but that’s the genius of real artists. They have an amazing way of burrowing their way into your soul, their messages so inextricably linked with your identity or sense of self, that losing them is like saying goodbye to a piece of yourself.

The piece of yourself that was a huge, inexplicable crush for this person who looked and sounded nothing like any person you’d ever known before. Not because you saw him as someone outrageous you wanted to be with, but someone who made it feel that having an outrageous side really was okay.

I still have a mix tape — yes, an actual cassette tape — leftover from the 80’s, with the original ChangesOne (1976) and ChangesTwo (1981) filling both sides. You know Rykodisk remastered and rereleased it after that (Fame 90? Pshaw) and it wasn’t quite the same. As I recall, they took out Oh You Pretty Things (…don’t you know you’re driving your mothers and fathers insane?) and 1984, replacing them with those pop-y late 80’s hits like Let’s Dance and Blue Jean.  It just wasn’t the same.

So I held onto that original cassette. Even now, all these years later.

I want to bring that Bowie cassette out and play it for my kids, explain how I it went with me from high school parties in New York to background music in college in Boston; how I listened to it in boom boxes and Sony Walkmen; and how I took such good care to rewind it for fear it would break and I’d lose it.

I think tonight I’ll hit YouTube or Spotify, and create a new playlist for my girls that they might appreciate, since I will die if they only think of him as the guy from Labyrinth with all the makeup who sings that funny song to Jennifer Connolly about the power of the voodoo.

I think we’ll save Queen Bitch until they’re a little older. But we’ll have something to look forward to.