Do You Remember Rock ‘n’ Roll? 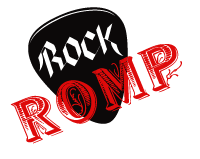 Remember when you were both younger and would go see bands play at the local club? If you’re like me, your kids came along and put an end to that. Is it really worth forking over seventy bucks for a sitter to see your nephew’s garage band fumble its way though Sweet Home Alabama?

Wishing to create an atmosphere where children could be exposed to decent live music, Debbie Lee created Rock-N-Romp, in which she opens her Washington, D.C. home to local bands, parents, and their children. These afternoon concerts give local bands great exposure, parents a chance to once again attend rock shows, and, most importantly, expose live rock ‘n’ roll music to a new generation of fans. Everyone wins.

Since its inception five years ago, similar Rock-N-Romps have opened in Baltimore and Memphis. And theAustin Rock-N-Romp is debuting in late July.

Now if I could only get someone to start a Rock-N-Romp in my neck of the woods. Father’s Day is coming up, you know… -Chag, Father’s Day Week guest contributor

* An ongoing list of the most trusted Coronavirus websites and resources * Expert tips for talking to your kids. Very reassuring! * What to buy beyond toilet paper and canned food * Pantry-stocking tips from someone who's trained her whole life for this * The best ways to clean and disinfect your phones and gadgets * Safety tips for orderinng take-out and delivery right now * 15 awesome podcasts to keep kids engaged * 7 gym alternatives keeping us sane * Homeschooling 101: Tips for newbies * How to create a homeschool schedule that works for you