Christmas music to help you supress your Grinch; Express your Elf 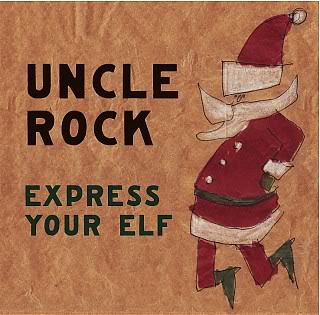 Whereas Alvin and the Chipmunks blaring on the radio this week was a far too jarring transition for me into Holiday Music Overplay Season, popping in the new Uncle Rock CD, Express Your Elf, was much more what the doctor ordered. Or at least the two kids in the back seat.

This album of fun Christmas covers includes Robert Burke Warren’s original takes on Most Wonderful Time of the Year and You’re a Mean One Mr. Grinch— seriously, Boris Karloff has competition with that baritone. There’s also a La Bamba-Feliz Navidad mashup that’s so seamless, I kind of wonder why no one ever did it before.

You definitely hear the Buddy Holly in a lot of these tracks (Warren actually played the legend on Broadway years ago) which makes Express Your Elf as a whole far more more hip than your average “pop star puts out a Christmas Album” album. Even the sentimental My Favorite Things gets a new, more soulful life here.

While the production is a little rougher around the edges than some of his past CDs, there’s enough fun stuff in here for several tracks to make it into your family-friendly holiday mix. (Download individual MP3s at CD Baby). And in fact when my daughter asked to play Santa’s Coming in a Whirlybird for a third time, I actually didn’t mind a bit. –Liz

Order Express Your Elf through the Uncle Rock website, from CD Baby, or from our affiliate Amazon