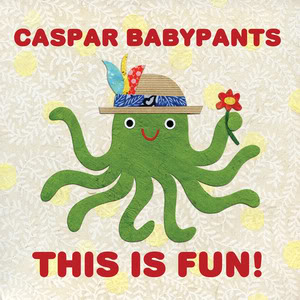 In my last review of a Caspar Babypants CD, I mentioned that Weird Al Yankovic had called him “one of the few children’s recording artists I can listen to without wanting to stab myself in the eyes,” which is my single favorite endorsement ever.

But if you need another reason why Caspar Babypants is the bomb-diggity, you’ve gotta hear track # 11 on his latest release which has none other than a member of Nirvana strumming the familiar bass line.

{don’t miss a cool giveaway after the jump!}

Of course one song–even one with Krist Novoselic–does not a CD make, so rest assured that the rest of This Is Fun! is, yes, fun. And full of singable, smile-inducing, dance-around-the-living-room music for our little offspring. Despite the Nirvana cover, this isn’t kindie rock in any way: The arrangements range from happy and poppy to quietly sweet.

You’ll bounce and clap, not head-bang, through it all.

Caspar Babypants may be on his third CD, but make no mistake: This is a guy who has been around the musical block, so to speak. As Chris Ballew, he heads up the still-performing Presidents of the United States of America—-a band which can still rock my 90’s faves Lump, Kitty and Peaches.

You can tell that he really loves the kids’ genre though, whether he is writing his own songs or putting his own spin on a traditional tune. I love reading his stories behind each song which give you a real feel for Ballew’s many sources of inspiration. Some of whom are folks like CMP fave Elizabeth Mitchell, whose duet with Caspar Babypants is as lovely as you’d expect from her. And I can’t tell you how much I love the way his voice sounds layered with that of the much-adored Charlie Hope.

I demand that those two make many more songs together. Pretty please? -Christina

You’ll find the Caspar Babypants third CD This is Fun! at CD Baby.

Congratulations to Laura B, lucky winner of This is Fun!