Raise a Ruckus with Hullabaloo’s latest CD for kids 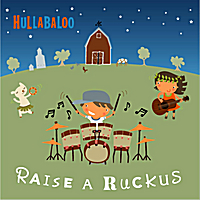 Steve Denyes of Hullabaloo has the kind of cool Johnny Cash-esque voice that would be right at home in a honky-tonk country bar. Fortunately for our kids, he and his childhood friend Brendan Kremer have decided to make great kids’ music instead of crooning to boring old grownups. And their latest release is a real barn-burner.

The dozen songs on Raise a Ruckus mix swing-your-partner country with story-telling folk and good ol’ rock-and-roll for a toe-tapping, upbeat sound. The fiddle-and-banjo-filled title song alone begs for dancing (and could exhaust even the most energetic five-year-old).
I love that Hullabaloo has such a great ability to look at the world from a kid’s eyes and then translate it into inventive lyrics. The song Bit Her tells a story about a brother who tests the notion that his sister is made of sugar and spice by biting her on the toe. And Favorite Day is a lovely little story about a child describing, in great detail, a painting of his family. That song gets a little extra sweetness with the added voice of Lunch Money’s Molly Ledford.
Plus there is something so fun about hearing Steve’s big, deep twangy voice singing songs about swinging like a chimpanzee or hiding green beans in his pocket so he doesn’t have to eat them. It’s silly like your kids’ favorite uncle who is always up for a screaming game of tag or a hilarious puppet show. Good times. –Christina
Grab a copy of Hullabaloo’s Raise a Ruckus at CD Baby.
Tags: kids' music that's actually good