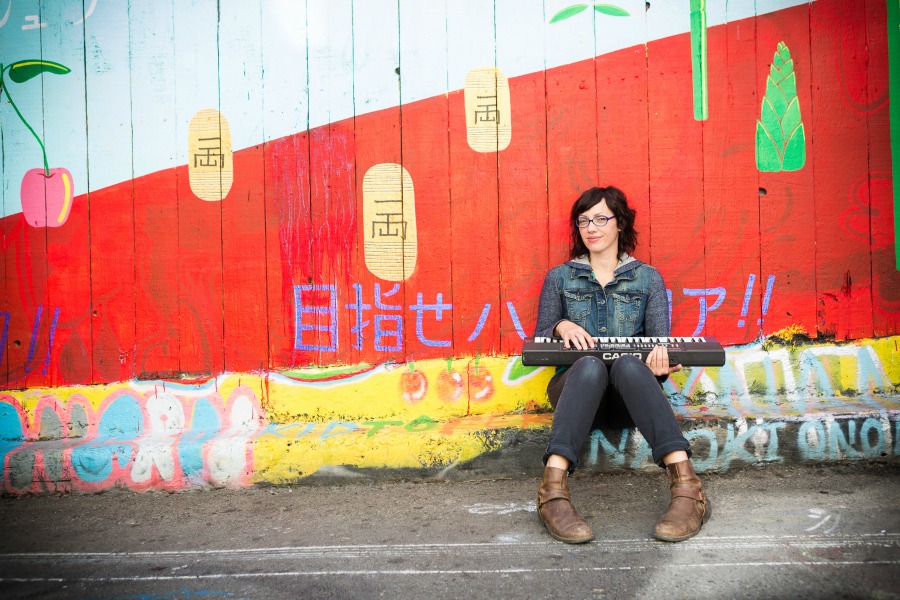 Here at Cool Mom Picks, we love finding the best kids music and sharing it with you. And I’m excited to share these 8 albums that I think you and your family will love right now. Of course, we’re always big fans of our friend Lisa Loeb and TMBG’s Danny Weinkauf, both of whom branched out to make really good music that the whole family can groove to. But in this list, we included some new additions to the genre, like Amy Lee, the lead rocker of Evanescence.

All 8 of these family music albums are fresh, fun, and are likely to make their way onto your playlist in 2017.

Dream Too Much by Amy Lee

Amy Lee, the singer of multi-platinum rock band Evanescence, became a mom a couple of years ago and was inspired to record a children’s album, Dream Too Much. Even sweeter, she collaborated with her father and sisters to record songs that he would sing to them at bedtime when they were little. Songs such as The Beatles’ “Hello Goodbye,” Sesame Street’s classic “Rubber Duckie,” Ben E. King’s “Stand By Me,” as well as some originals written by Amy herself. Ukulele, old-fashioned harmonizing, banjo, and a harmonica provide the music to the gorgeous vocals on this album you’re sure to love.

Explorer of the World by Frances England

Frances England, a San Francisco, CA native (that’s her at top), has been making excellent family music that blends folk and indie sounds since my eldest was just a toddler. Her latest album Explorer of the World may just be her best yet. She just scored a Grammy nom for it, so you know it deserves props. This album is universally good for families and kids of all ages — even my 13-year-old gives it a nod of approval.

My family became big fans of Lard Dog after seeing them perform in NYC last year and the CD Life’s a Real Dream is played regularly in our home. The Human Lard Dog, aka Steven Erdman, and The Band of Shy play really lively, toe-tapping music. Plus, he’s like a modern day version of Pee Wee Herman so there’s a natural, underlying quirkiest. Sure, the lyrics are silly and kooky on the surface, but deep down in the songs about slurping noodles and wearing colanders for headgear are messages of embracing who you are, being positive, having big dreams, and — perhaps most importantly — the benefits of being nice.

Related: The best kids music of 2016 | Editors Picks of the Year

Keep On by Little Miss Ann and Amy. D.

Little Miss Ann, an already popular artist in kids music, has collaborated with Kindie newcomer Amy D. to record Keep On, which will come out next month. The musicians from Chicago have been compared to family music greats Ella Jenkins, Raffi, and Elizabeth Mitchell, for their upbeat, down-to-earth and interactive folksy music. The album has an eclectic mix of music with songs to appeal to a range of ages, like the 50’s doo-wop song, “L.O.V.E.,” the Liz Phairish rockin’ ode to Chicago “The 606,” a Jamaican Calypso song that is guaranteed to stir up a family dance party, and a trippy rendition of “Tiptoe Through the Tulips.” Bookmark this one and look for the album in February.

Let All The Children Boogie: A Tribute To David Bowie

We wrote about this awesome tribute album to the late and great David Bowie right before it was released and, after playing it regularly for the past couple of months, my family loves it more and more each day. Let All The Children Boogie features some of the best in the kindie and indie music industry. The all-ages cover album features 20 songs to introduce Bowie to a new generation and is guaranteed to get everyone up and dancing.

I Will Find You No Matter What: The Songs of Luc and Bob Schneider

Austin musician Bob Schneider, who was in the band Ugly Americans before going solo, recently released I Will Find You No Matter What: The Songs of Luc and Bob Schneider with his 11-year-old son Luc. It’s quirky, fun, and super sweet. We love that the album includes original music made by Bob and his son throughout his son’s childhood — songs recorded when Luc was just 4, for example. Standouts are “Denied” — about fantastic dreams and the joy they bring — and “Monstertruck,” which has a funky B52s vibe.

Arriba Abajo, the latest album by bilingual family musician Andrés Salguero, has been honored with both a Latin Grammy and the Parent’s Choice Gold Award, and I think that’s well deserved. The songs are in both English and Spanish, but it’s not just a bilingual album for little learners. His upbeat rhythms and super catchy melodies take listeners on a Latin American adventure.

Sing-a-Long History, Vol. 2: The Rocket Went Up! by The Deedle Deedle Dees

The Deedle Deedle Dees, a Brooklyn-based educational rock band, recently released this album and it’s excellent. From Ada Lovelace to Diana Nyad, Houdini to Stephen Hawking, Tesla to Typhoid Mary, the album features fun facts about important people throughout history in the realm of science and discovery, all sung to very danceable beats. Sing-a-Long History, Vol. 2: The Rocket Went Up! is like Hamilton-lite. Which makes it the favorite in my home.

We are so grateful for people like @teacherlahey w