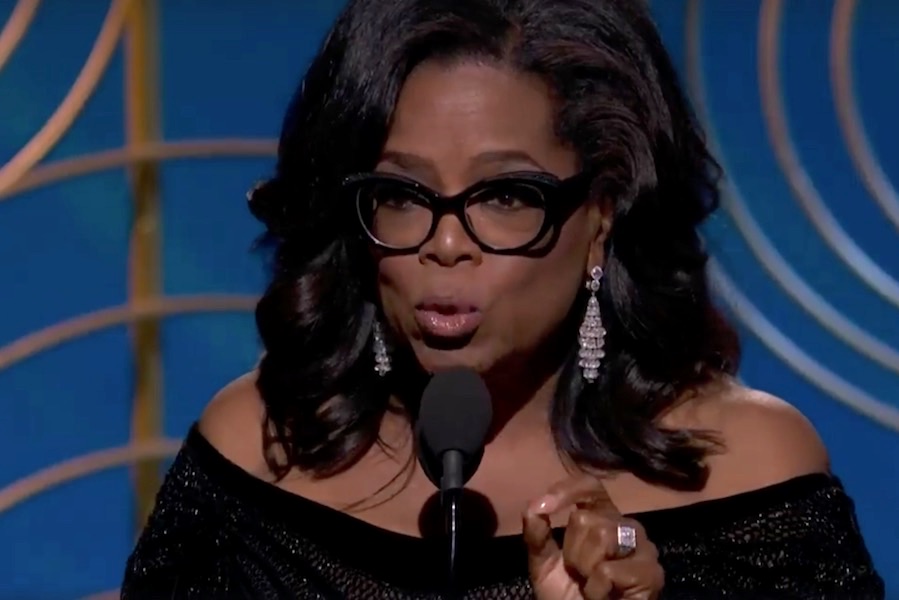 Knowing that the Golden Globes would be more about female empowerment than fashion this year, with more red carpet questions and speeches about #MeToo movement and activism and gender parity and social justice, I decided to let my kids stay up and watch the awards show as a family.

Seeing the sea of black gowns worn in solidarity, the discussion of the meaning of the dresses rather than the designers, the activists on the red carpet, and that incredibly powerful speech from the ages by Oprah Winfrey — herself breaking barriers as the first Black woman honored with the Cecil B DeMille award — have me truly hopeful that, as she said, “a new day is on the horizon.”

Related: Getting blunt with my daughters, because #metoo.

I never thought I’d say these words, but the 2018 Golden Globes made my desire for real, tangible change for women in this country feel attainable.

It also showed my girls that all people have the power to make real change, and that even those huge Hollywood stars have their own stories to tell, their own demons to battle, their own courage to muster when it comes to speaking truth to power.

I’m happy that in one of the most amazing show-steaming ad-libs of the night,  my girls saw Natalie Portman call out the Hollywood Press for a lack of women in the Best Director category. Because true opportunity for women and equal pay for equal work have a long way to go when it comes to even those at the top of their craft.

As Barbra Streisand reminded us on Twitter, it’s been 34 years since a woman won a Golden Globe for best director, and Patty Jenkins wasn’t even nominated for Wonder Woman — one of the three top films of the year, each of which was carried by women!

Here’s a terrible fact—
There has not been a single woman who has won the Golden Globe for Best Director since I was fortunate enough to win it for Yentl in 1984…that’s 34 years ago! Not right!

I’m grateful my kids heard Laura Dern’s wish, “May we teach our children that speaking out without the fear of retribution is our culture’s new North Star.”

I’m glad that they learned more about the Time’s Up Legal Defense Fund, and that its prominence in the show opened a door for us to talk about its mission as a family. They need to understand that as much as I say “you can grow up to be anything,” these is still institutionalized misogyny that impacts women professionally, psychologically and financially in every single industry.

I’m happy they learned the name Recy Taylor, thanks to Oprah’s mention of her.

And of course, I’m thrilled that my daughters were able to see Oprah Winfrey’s Cecil B DeMille acceptance speech live, because I believe it was an historical and profoundly important speech that we are going to be referencing and quoting for years to come.

I will be honest, watching the show with my family last night was just what I needed to diminish some of the rage that has filled my belly since the #MeToo movement burst wide open.

I’ve been so freaking mad, because hearing the hoards of brave women share their stories of harassment and assault brought back memories of times that I was subjected to gross abuse of power from men. I’ve been disillusioned and angry that men, whom I once thought to be decent, have done horrible things. I’ve been distraught that, like Liz, I had to discuss sexual harassment with my daughters, who are just ten and 14 years old. And I’ve been just devastated thinking that the inequality and injustice may not change when my Black daughters enter the workforce.

But the more than 300 women in the entertainment industry who have joined forces with top female attorneys to form the Time’s Up Legal Defense Fund have turned my rage into hope.

For the first time, it’s like I know just what to do with all that anger and emotion I’ve been feeling.

So I hope Time’s Up is the beginning of the next chapter. And that chapter goes well beyond Hollywood.

It’s correcting the fact that the media around #MeToo left out many women who who didn’t have the means or platform of the celebrities who helped it garner media exposure. Now, the mission is more in line with what Tarana Burke, the founder the #MeToMovement, intended. — to help survivors of sexual violence, particularly young women of color from low-wealth communities, find pathways to healing.

The Time’s Up Legal Defense Fund will not only will give working women access to comprehensive legal aid, but by addressing the systemic inequality and injustice in the workplace (all workplaces), it will help underrepresented groups reach their full potential.

Last night, my girls saw that too.