Teaching kids to read just gets more and more fun. 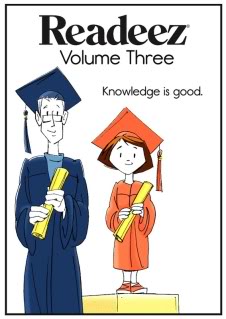 When my kids were younger, I used to leave the Closed Captioning up on the television so they could get familiar with the words coming out of the mouths of their favorite cartoon characters. Taking this idea one step further and more effectively, in my opinion, are the Readeez series of DVD’s and downloads that we’ve featured both here and on Cool Mom Tech.

Now, there’s a new one out that’s totally worth a look for parents whose kids are just learning to read.

{keep reading for a great giveaway and a special discount on anything in the Readeez store!}
Starting off with a father-daughter chat between hand-drawn
characters Julian and Isabel, the Readeez Volume Three DVD takes the viewer through a series of songs,
stories and nursery rhymes. Rather than sentences just appearing on the bottom of the screen, Readeez
words pop up, syllable by syllable in perfect sync as the sounds are
uttered. This SyllableSync technique is amazingly accurate and fun to
watch again

Thankfully the characters and illustrations
don’t move or try to mouth the words or there would be waaaay too much
going on at once. Instead, your eyes are allowed to focus on the words
popping up on the screen.

This may be the homeschooling parent in me, but my favorite songs are also instructive, like in songs that teach a bit about outer space, telling time and even math, grammar and manners thrown in for good measure.  And Catch With Anything gave us a great idea for some rainy-day indoor fun. I also love the Readeez-ized songs by CMP kindie music favorites Recess Monkey and the Okee Dokee Brothers.
My only quibble with the SyllableSync system is when the song’s lyrics are a bit too quick, as in Old King Cole. My eyes almost went cross-eyed following the tongue-twister-ish lyrics. Thankfully, this is the exception, not the rule and younger, more nimble eyes may not even have a problem with this at all. –Christina
Get Readeez Volume 3 from the Readeez website, and get 20% off everything in the Readeez store from now through July 31, 2011 with the code cmp0711.
Congratulations to Andrea G!  She won a Readeez set with Readeez DVDs volumes 1, 2 and 3 as well as Songeez.