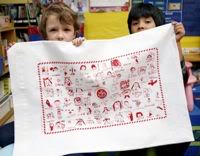 There’s little I hate more than fundraising time at school. It’s not that I don’t want the school to have money, it’s just that there’s only so many stinky candles and rolls of wrapping paper and overpriced magazine subscriptions a person needs, y’know? Plus, I can’t be the only one who’s just not terribly comfortable with my kids being drafted into sales force servitude.
But I’m totally digging this fabulous new school fundraising idea from Portrait Press.

Two Brooklyn parents–daunted by the amount of money their schools
always needed (but couldn’t seem to raise)–realized that if they sold
an item everyone wanted, money could be raised with a lot less fuss. So
they developed their Portrait Press
fundraising kit, wherein each class creates artwork for a tea towel,
pillowcase, or tote bag.

The result is a cool keepsake representing the
entire class, so every family has the incentive to buy a couple, and voila–money for the
school. Meanwhile, no one ends up with another neglected candle.

Even
better, Portrait Press uses part of their proceeds towards a grant that
allows disadvantaged schools to develop their arts education programs.
It’s money for your school, money for a great cause, and a great
keepsake. Sign me up. -Mir
Visit Portrait Press Fundraising for amazing school fundraising ideas and take the agony out of raising money for your school.
Tags: back to school, charity + causes, custom gifts, kids' art, personalized gifts

Mir Kamin is a prolific writer, the author of the popular blogs Woulda Shoulda and WantNot.net, and a former contributor to Cool Mom Picks and Cool Mom Tech.
Bio
Twitter