The new Phil&Ted’s Dot stroller. Not just for city moms. 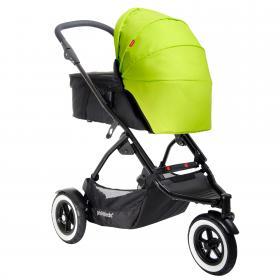 Confession: I still envy the fancy strollers of my city-dwelling mama counterparts. But raising four kids in the suburbs doesn’t present much of a rationale for much more than the bare basics. At least, that’s what I thought until I was introduced to the newest stroller from Phil&Ted’s.

Let’s just say now I know what I’ve been missing all these years. And why everyone raves about their strollers.

The new Phil&Ted’s Dot stroller is definitely an urban mom’s dream, with careful attention to all the ins and outs of city life, like maneuvering through busy streets and tight subway spaces, thanks to a slimline frame and 10-inch wheels. What you lose in width, though, you don’t actually lose in seat size, or in the safety and sturdiness Phil & Ted’s is known for.

However, don’t think that you have to be cruising cobblestoned city streets to own one of these. Unlike lots of larger-frame strollers I’ve tried, it fits easily into a car trunk, so you will actually take it with you rather than leave it in the garage relegated to neighborhood walks.

I’m super impressed with the thoughtfulness and versatility of the Dot, with everything from zip-off fabric for easy cleaning and main seat recline so your kids can lie flat and sleep, to adapters that turn it into a baby pram and a double stroller with the backseat rider feature Phil&Ted’s is known for.
So not only are you pretty much getting 3 strollers-in-1 (with the extra pieces, of course), but you’re getting something that won’t take up half your apartment or your garage. Since we parents already have enough stuff crowding our living spaces, it’s a huge bonus. And while it might not be the workhorse that you’ll get with their more expensive models or even comparative models from other brands, if you want a higher-end stroller on a budget, or are looking for a sleek second stroller that’s got the bells and whistles without the hefty size (or heftier price tag), this is a smart way to go. –Kristen
You can purchase the new Phil & Ted’s Dot stroller at Buy Buy Baby. Thanks to Phil & Ted’s for providing a stroller to us for review.
Tags: stroller accessories, strollers

👏🏽So moved by this art by @kadirnelson. Stay