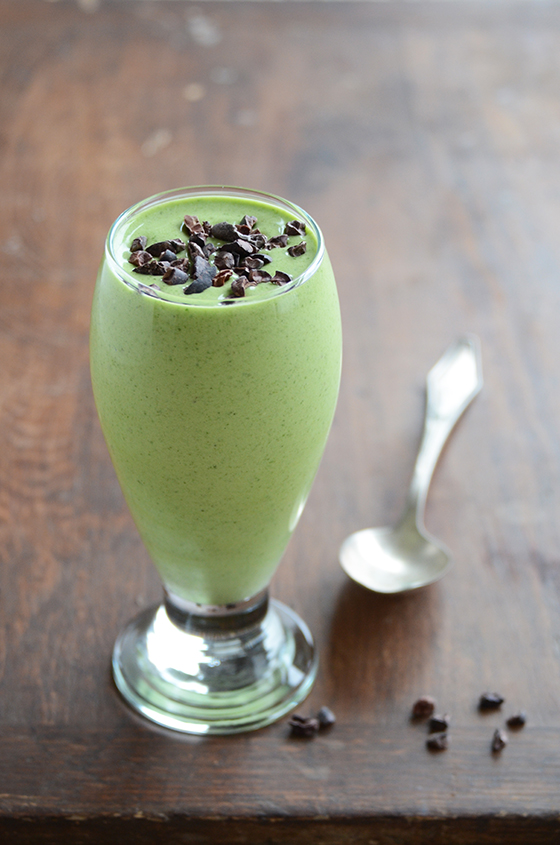 It’s the time of year that many in certain frozen dessert circles call Shamrock Shake season. March and St. Patrick’s Day mean the end of a year-long wait for devotees of the green shake. Personally, I’m not the biggest fan. Not because I don’t like sweet, minty shakes (I do!), but because I find a “shake” at a fast food joint containing 54 ingredients a little suspicious and a lot unappetizing. If you are looking for some DIY alternatives , these 5 copycat shamrock shake recipes are for you.

The healthy Shamrock Shake (above) from An Edible Mosaic is a totally delicious dairy-free, mint-flavored smoothie. Faith uses stevia in her version, but gives guidelines for how to use granulated sugar if you prefer.

I found this tasty Minty Kiwi Shamrock Shake on the blog for all-natural snack delivery service, NatureBox. Most all-natural green shakes get their color from mild but savory spinach, so I love how this recipe by Angie of Little Inspiration uses sweet kiwis to get that green hue.

The kale trend may have peaked, but many of us still eat the hearty green veg on a regular basis. If, like me, you always have some around, use it to make this St. Patrick’s Day Green Smoothie inspired by the Shamrock Shake recipe from Cupcakes and Kale Chips. Brianne isn’t over kale and neither am I, darn it.

If these shamrock shake recipes sound way too healthy to you, I present thee with a traditional copycat Shamrock Shake. This recipe from Casa Resnick calls for artificial food coloring but we suggest using a natural food color. Other than that, it contains only 5 simple ingredients, which strikes me as a major improvement over 54.

If we’re crossing the super natural line, we might as well throw in a boozy option. This Drunk Shamrock Shake on BuzzFeed Food is spiked with Irish whiskey, which sounds like the classic way for a lot of people to celebrate St. Patrick’s Day. Cheers!