Thinking : Parent – The LEGO Friends wars are back, and girls are losing. But not for the reasons you think. 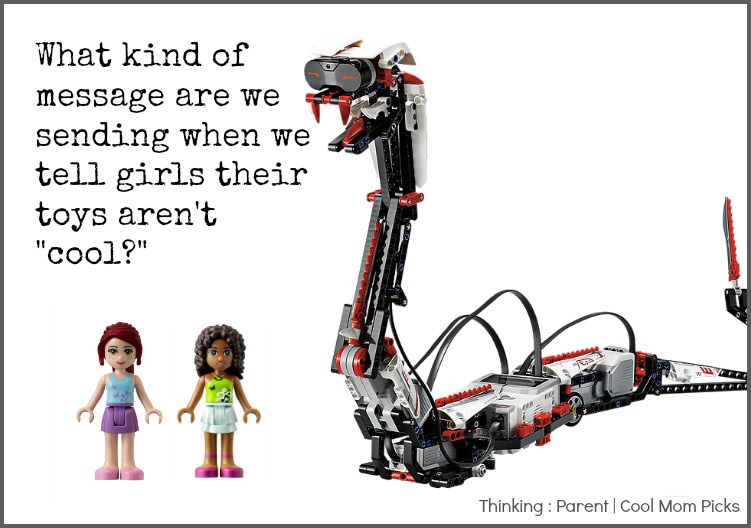 This week, I’ve seen a lot of shares of a set of fantastic photos from A Mighty Girl, featuring a friend’s daughter turning a LEGO Friends Juice Bar Set into a cool robot.

My fourth-grade daughter, Thalia, who just spent 10 straight hours on Saturday in the NYC semi-finals of the First LEGO League Robotics Competition (says the proud mom), hardly glanced at it before raving, Awesome!

And it is! Majorly awesome.

However when I take a look at the comments circulating about the post, they’re starting to bum me out.

I think the issue is best exemplified in the headline of a Cult of Mac article (thanks for the tip, Kim) called Girl Turns Boring LEGO Juice Bar Into Awesome Robot; and language which I think progressive, gender-issue aware parents like me are increasingly programmed to use.

Have you ever sat down and watched a creative child play by herself or himself with a set of LEGO Friends? I can sneak in on my second-grader for just a few minutes and it’s captivating. She’s not limited by the set in front of her or the photo on the box, only by her imagination.

The writer of the Cult of Mac article is a dad of two, and I don’t think he intended any malice. In fact, I think it’s absolutely wonderful to see a male tech writer giving girls props for their robot-designing and construction skills. I think he’s just doing what a lot of us do — me included — in a noble effort to crusade against gender-specific toys and the pink aisle and the perceived limitations in toys marketed to girls: We put down the so-called girls toys.

We deem a juice bar play “boring” or “girlie” or “lame” relative to robots or alien fighters or astronauts or Minecraft or pretty much anything else, and that sends a strong message to kids.

When we call the toys that girls like inferior, we’re actually telling girls that the way they play is inferior.

I think the coded language we use, without even realizing it, is actually more detrimental to girls in the long run than any single LEGO set at all — except perhaps the yet-to-be-released LEGO Very Special Friends: Orange Is the New Black Shower Room Set.

As far as I’m concerned, inferior toys have nothing to do with pinks or purples. Inferior toys are those that fall apart in two seconds. Inferior toys promise more than they deliver. (My Evil Knievel doll of my own youth never managed to jump that stupid ramp on his motorcycle like in the commercial, damn him.) Inferior toys ruin your carpet or hurt kids or just look so creepy that you sneak them into the Goodwill bag when your kids are off at school and hope they forget about them. Ahem.

While am proud to call myself a feminist, once upon a time I would have condemned so-called girls’ toys too, but I’ve had a shift in my mindset over the past ten years (eep) of parenting, and I know that Kristen has too.

I always joke that now I’m not anti-princess, but pro-choice, and I hope that the toy recommendations you see here and on Cool Mom Tech reflect that. In other words, we no longer think “ew, princesses” but instead, “yay for princesses and blocks and STEM toys and cooking kits and fairy wings and black shoes with skulls on them and kits to get more kids building.”

In fact, Friends sets are probably a great gateway to LEGO Mindstorms that some girls might not otherwise have discovered. Or, maybe they’re a gateway to writing a huge hit sitcom about someone who owns a juice bar.  You never know.

Of course I don’t love every single item in the Friends line. As I once said, I could live without a beauty shop and I admit I’d rather my girls pick the Jungle Tree Sanctuary over the Model Catwalk; though my girls are more inclined to choose Minecraft LEGO these days, as my December Amex bill will show you.

(I also understand this week’s justifiable outrage from parents towards the recent LEGO Club Magazine, after Sharon Holbrook’s NY Times column revealing a magazine feature on “beauty tips for girls” from Emma. When I think of all the fantastic things LEGO sets have done for my kids over the years, I doubt that we’ll somehow work “learned to accentuate my cheekbones with my haircut” into  their Middle School applications.

But as for the Friends sets overall, where they succeed so well is allowing girls to play the way they naturally play; girls don’t just want to build/destroy/repeat. They also want to create social situations, concoct ongoing storylines, develop communities, and use their imaginations.

In fact one of the reasons I came around to accepting Friends is that they play well with others. I asked my oldest daughter about them this morning and she told me a similar thing we hear from a lot of parents:

I mix my LEGO sets so there are a ton of people working together to fight the evil skeleton. So they build spaceships using all the extra pieces that I have that don’t really fit anywhere else.

The LEGO Minecraft Skeleton, defeated by Andrea and her exploding spaceship

My younger daughter likes to “make people dance” while Emma specifically paints and writes a blog at her computer, “just like you, Mom.”

I admire how avidly progressive parents increasingly want to celebrate non-gendered toys, and I hope we’ve helped to encourage that here. But we should make sure — and I include myself here big time — that in giving our girls more play choices, we don’t put down all kinds of toys that they love.

I want to celebrate all the different ways my girls play and use their imaginations and creativity. And I want to tell this amazing robot-building girl that she should be so proud of how she used her imagination and building skills to create something totally unexpected and wonderful; not that she turned something bad into something good.

Because as Thalia explained to me, “LEGO Friends is cool! You can do parkour on it!”