Are LEGO Friends good for girls? Let’s talk about it. 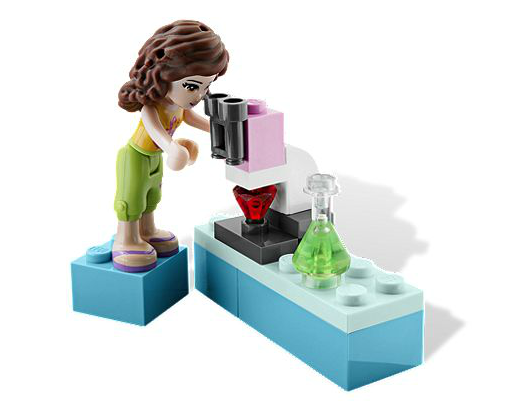 I’ll be frank, quite a few of us groaned along with many of you when LEGO Friends was announced; that series of pastel-colored, “girl-friendly” kits which seemed heavy on the pink and purple, with themes like Butterfly Beauty Shop. (Gah.)

At Toy Fair earlier this year, Christina and I got a good look at the entire line. And since then, we’ve each spent the last few months with our girls playing with the kits, deciding whether we could truly recommend them or not. Here are the issues we were concerned about, and where we both panned out.

Concern 1: Compatibility with existing LEGO kits
One of our more mechanical concerns was that the LEGO Friends wouldn’t be compatible with the other kits, and would be designed daintier somehow, for girls’ hands. To say nothing of the nightmare of storage. As it turns out, that’s not the case; they all work together. So if you want to have “Emma” hanging out with Harry Potter, or your favorite Star Wars characters popping in for a visit at the Vet’s Clinic, go for it. It might even liven things up a bit.

In fact, Christina reports that because she doesn’t separate out the Friends and the traditional LEGO kits (she stores them using one big Swoop bag) it turns out her son grabs plenty of the pieces from his sisters’ kits to incorporate with his own. Hey, boys like pink and purple too.

Concern 2: Does everything for girls have to be pink?
Admittedly we can get a little sick of pastel pink as the default girl color in the world, automatically signaling that primary colors are the exclusive realm of boys. Turns out that most of the kits don’t actually lean on pink as much as they feel just bright and cheery when you see them all together. And hey, because of the compatibility with the other kits, feel free to add your own blues or yellows or greens or blacks.

Concern 3: Are girls giving up building skills here?
Speaking with one of the heads of development at LEGO (also a father of two girls), it was interesting to hear the research they conducted to come to the LEGO Friends idea. Girls and boys both enjoy building things like castles, no problem. But afterwards, for boys the castle becomes the backdrop for the fighting the characters do. As for girls, they’d look inside the castle and say, “but there’s nothing to play with now.”

Obviously this is a generalization to some degree–and yet we’ve experienced the same with our own girls and boys. So we’re not surprised that LEGO Friends were designed to let girls employ their creativity to build the environment, then afterwards, have opportunities for imaginative play and storytelling. It’s probably what’s kept them so engaged all these weeks.

Actually, the more I’ve watched my girls play, the more I’ve considered that these themes might even create more opportunities for creative storytelling–unlike the kits based on licensed movie and TV properties.

I mean, think about it: Harry Potter is Harry Potter, even if he’s hanging out in a Treehouse. But Olivia is whomever you want her to be. And she can be pretty handy with a wand or a firehose too.

Concern 4: Where are the boys?
Oddly, every male character in the Friends kits is a father. Where are the boys? Honestly, I have never ever been to a beauty salon that didn’t have men working there. I don’t think that’s just a New York thing.

Concern 5: A beauty shop? Really?
Yeah, I can’t entirely endorse that one. And I don’t love that the “town” is called Heartlake City. (What, Sparkleville was taken?.) If you’re going to grab a LEGO Friends kit for a
girl in your life, and want something a little more gender-neutral than a beauty shop or a fashion design studio, consider the Veterinary Clinic, the City Park Cafe, or my favorites: the Invention Workshop and the Treehouse.

I’m on the fence about the  Olivia’s big purple LEGO convertible which even a drag queen would call over-the-top, but at least Olivia has the tools she needs to wash it herself.

And in fairness, I must say that my girls do love that LEGO Friends Fashion Design Studio. Especially when my little one has “Emma” at the laptop, and says she’s a writer like mommy. (Sniff.) I guess that’s what I mean by all the creative play opportunities–LEGO says she’s a fashion designer, but your kid can turn her into a novelist.

Or, as my five year-old goes, she’s a novelist who then has a sword fight and rides off on a rocket ship.

Concern 6: What the heck are they wearing?
All things being equal, I wish the LEGO Friends didn’t have breasts or waistlines or mini skirts. While they’re not provocative, I do wish they were a little more you know…LEGO-like and a little less Barbie.

It’s the same way I felt when tween Dora appeared, with long flowing hair and shapely calves. I mean, check out LEGO Wonder Woman–she’s hardly sexual relative to these girls.

I’d say, if this really bugs you, but your girls are pining for a Friends set, grab some figures from the other kits and hide Emma in your dresser. At least from what I can see, my kids don’t like the sets for what the girls look like at all. They just really like the situations.

Our Net:
Click “shop for girls” in the LEGO online shop and you might be surprised to see it’s not just castles and swimming pools–there are cities, winter villages, a cool VW camper van, and “Heroic Heroes of the Deep.”  I truly don’t get the sense that LEGO is trying to alienate girls from the original building sets; I really feel like they’re trying to bring additional girls into the LEGO building world. And mostly, I’m glad that we took the time to really play with the sets at home before forming an opinion.

And really, the kits are a lot like some existing toys that girls are drawn to, only with more building potential. Christina calls the Friends minifigs “Polly Pockets but minus the tiny shoes,” ha.

While I do obviously have some challenges with the LEGO Friends, my bigger issue is with the retailers. It’s the stores that create “boy” aisles and “girl” aisles without even giving kids a chance to choose what they like.

(If the Batman kit was next to the purple convertible, I bet there are some boys who’d love that bright violet car, and some girls who’d be drawn to the Caped Crusader.)

That just means that we as parents need to let our kids know the most important thing: there’s no right and wrong in what they chose to play with. But they always have a choice. And so do you. –Liz, with input from Christina

Find more about LEGO Friends online at the LEGO website, or at stores pretty much everywhere. And let’s hope we get some more kits featuring female chefs, pilots, college professors, soldiers, Olympic athletes, and farmers. Just like real life.