A formula dispenser bottle that’s a game changer when you’re on the go. 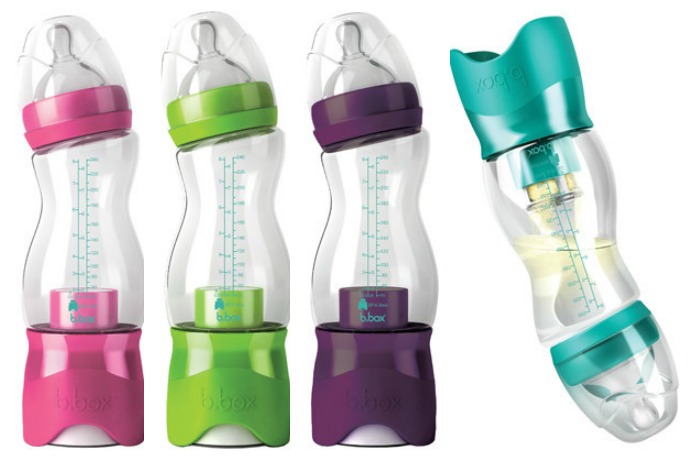 While it falls squarely in the category of #firstworldproblems, making bottles with formula when you’re on the go can be a pain in the neck. Individual sleeves of formula are easy, but not in my budget. Those little three-way containers are an improvement over lugging a value-sized container of formula in my diaper bag, but it can still be a mess to pour it into the bottle while I’m trying to balance a baby on my hip too. So I’m thrilled to share the a new formula dispenser bottle  from Australian company b. box that I discovered, because it’s going to make life easier for a lot of new moms. And dads.

This one’s a game changer, you guys.

Related: A bottle you can make with your smartphone.

You just fill the dispenser with formula before you leave the house. You can go ahead and fill the other compartment with water, or wait and do that later. Then, when you’re ready to feed your baby, push the dispenser portion up to release the formula into the bottle.

Give it a good shake (Taylor Swift singalong, optional), and baby’s ready to eat. That’s it.

After my initial whoa wore off (seriously, this is ingenious), I did wonder whether this bottle could get annoying for everyday use. You know, since I’ll also be making bottles at home a lot and won’t need the dispenser portion. But turns out b.box thought of that too, so each bottle comes with a standard bottom attachment.

Right now, the b.box bottle is only available in an 8 oz size. If you’re desperate for a smaller size, you could use the more expensive Mixie bottle that works in a similar way. But since they run from $14.95 to about 21 each (depending on the color, oddly) I think it makes sense to go ahead and get the larger size so you can use it longer. Different nipple sizes allow you to use it from newborn stage till you’re ready to wean. And, hallelujah, both ends are removable so the bottle is easy to clean too.

If you’re a formula feeder, I can assure you I’m finding this a huge improvement over the messy system we’ve been using on-the-go up until now. And for that, we’re grateful.

Make on-the-go feeding easier with the b.box formula dispenser bottle, available at our affiliate Amazon. Starting in April, you can get US shipping directly from the b.box site.