No Songs ‘Til Brooklyn 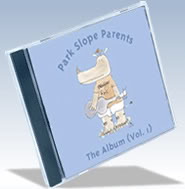 I’m not always crazy about theme-y kids albums. 100 Songs About Spiders – whoopie. But when I hear the theme revolves around my own home base of Brooklyn, En-Why–well then I have to check it out.
Park Slope Parents: The Album (Vol. 1) is a fundraising effort from the largest online support network for New York parents. And what contacts they must have over there in Park Slope! Just check out the roster of 17 artists on the compilation, nearly all of them local (or formerly local), including kindie rock icons like Dan Zanes, Audra Rox, Music for Aardvarks founder David Weinstone, and the Deedle Deedle Dees.
The mix is fairly eclectic, from rock to folk to country, with plenty of new tracks that you won’t find on any other album. And while some of the tunes revolve around Brooklyn themes like subways and the Major Deegan (that’s I-87 to the tourists), mostly they’re just catchy, enjoyable songs that any kid will love, whether he lives in 11215 or not.If you’re local you can buy the CD at pretty much every hip kids boutique in the borough. Otherwise hit CD Baby where you can review samples before you snatch up your own copy. But do it now – only 5000 will be made. How very New York. -LizIf you’re in and around the City on March 25, hook yourself up with tickets to the CD release party here!
Tags: kids' music that's actually good