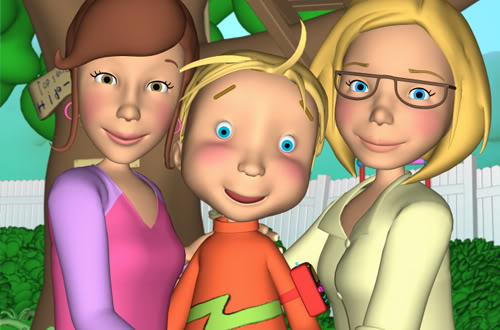 One of my greatest reservations when considering a move away from New York was the perceived lack of diversity in middle America. Happily, I’ve been surprised by the different kinds of families we’ve gotten to know, even in our little suburb. (Even if the ethnic food choices could use some help.)

Another sign that diversity is becoming more widespread is Buddy G – My Two Moms and Me, a new cartoon that educates and celebrates well, kids with two moms. Parents Donna Colley and Margaux Towne-Colley sought to create a show that reflected their own family, but Buddy G is definitely not just for children of gay couples.

Don’t expect Adult Swim-quality animation here; although the content definitely makes it worth a watch, especially for kids who don’t see families on TV that look like their own.

And sure, the episodes might raise a question or two from your kids, but the way I see it, it’s way easier to explain that love comes in many forms than to explain where babies come from. –Julie