(Interjection)! Schoolhouse Rock Is back to rock the earth 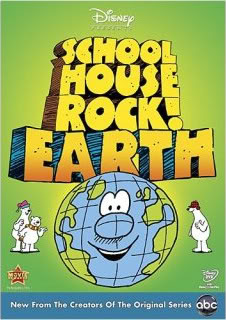 When my kids heard Schoolhouse Rock was coming out with a new DVD, Schoolhouse Rock! Earth, they were as excited as I was, seeing that they’ve heard the original songs since they were old enough to say Unpack Your Adjectives. I can’t think of a better reason for members of the beloved ABC morning series of my childhood to reunite than to spread the message about conservation, recycling and environmental awareness.

In true Schoolhouse Rock fashion, this DVD relies on catchy songs and fun-to-watch cartoons to educate the young and (not so) old, all with, thankfully, the exact same look and spirit of the original series. Some of the original singers are back too. Hearing the familiar voices behind I’m Just a Bill and Conjunction Junction in songs like The Little Things We Do (with its Mr. Morton “the subject of the sentence” cameo) hit me right in the nostalgia jugular. There is even a digitally remastered version of The Energy Blues whose lyrics are as relevant today as they were more than thirty years ago.

About ten minutes into watching Schoolhouse Rock! Earth, my eight-year-old jumped up and shut off all the unnecessary lights in the room. I’d say she’s getting the message.

Schoolhouse Rock! Earth is out on DVD this week! And if you feel like introducing your kids to the original songs, find them on the Schoolhouse Rock website.