Riveting. Or is it ribbiting? 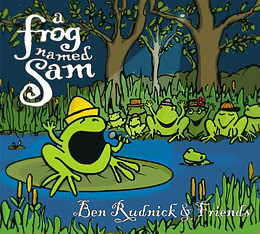 I’ve read a few reviews that liken  Ben Rudnick & Friends’ new CD, A Frog Named Sam, to a kid-friendly Grateful Dead or Phish album which I guess could be a real plus for a lot of people. For me, though, who spent one blurry weekend at a Phish show and then moved on, I feel the need to assure you that this CD does not have a single 25-minute instrumental jam.

Instead, you’ll hear some amazing guitar, banjo and other strings paired with smooth harmonies from this group of Boston-area musicians. Set squarely in the “American Roots” style, I hear a lot of folksy, bluegrassy sounds mixed with a few toe-tapping, fast-moving jigs. It took me only a few minutes to be hooked.

A Frog Named Sam is about evenly split between original songs like Race Car, a speedy ode to my son’s latest obsession, to classics  like a rousing version of Old Joe Clark. They even somehow cover Three Little Fishies with enough cool harmonization and funky saxophone to make up for the cutesy lyrics, and that’s saying something. –Christina

Congratulations to lucky CD winners Carrie A and Christine W!