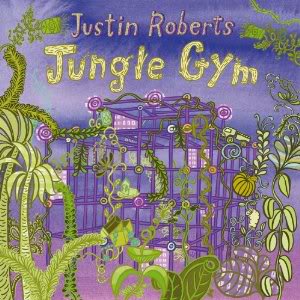 Though we have stacks of kids’ music CD’s—one of the perks of reviewing kids’ music for Cool Mom Picks–I know that I’ll always hear something from Justin Roberts coming through our stereo’s speakers every few days. It’s a powerful testament to the many infectious, wanna-hear-again songs he’s put out over the past twelve years that end up on all our playlists.

Now we have another album to add to our mix: Jungle Gym, a family-friendly CD packed with a dozen instant kindie classics that brilliantly capture so many of the themes and ideas that float around my kids’ heads.

Starting off with We Go Duck, a reference to that universally played gym class game, Justin covers everything from the melancholy of watching the world run by when you’ve got a broken arm (Sign My Cast), to the silent prayers kids whisper when the world turns white on Snow Day. The poignant Never Getting Lost handles every parent’s worst 10-minute nightmare without getting too scary, though I still fight tears every time I listen to the words.
Using just about every instrument the band could get their hands on, as well as loads of harmonies and background voices, the sound on Jungle Gym is super grown-up. But as the perpetual Peter Pan of indie kids music, Justin Roberts still sounds so boyish, it’s perfectly plausible and not weird that he sings from a child’s point of view.

Though maybe it’s weird that I sing along just as loud as the kids? Nah. –Christina

Justin Roberts’ Jungle Gym is out today! Grab a copy or instantly download from our affiliate Amazon. And check out the adorable video of the new song, Obsessed by Trucks, which pretty much sums up how my girls feel about their little brother.