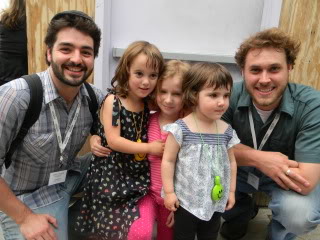 Last year, I attended Kindiefest, the coolest kids-and-family music conference and band showcase, and have been excitedly waiting for details about Kindiefest ’11 ever since the calendar turned over to a new year. My daughter who came with me? Yeah, she’s been waiting too. In fact, that’s her, in the middle of this photo, surrounded by Liz’s daughters and CMP fave band, the Okee Dokee Brothers.
Not in the music industry? No worries: If your kids are old enough to shake, rattle and roll—or even just do that adorable baby bounce dance—I’ve got the greatest excuse for you to make a road trip to Brooklyn on the first Sunday in May.
If you’re in the industry, well you’re going to want to catch the
awesome conference panels and workshops, and rub elbows with music
veterans and
those just breaking into the family music genre–along with publicists,
agents and press (waving). Our own Editor-in-Chief, Liz Gumbinner, will
even be there to
moderate a panel featuring the much-loved Laurie Berkner and super-cool Secret Agent 23 Skidoo.

But on Sunday, May 1st, Kindiefest goes from being an industry-only conference to a public music festival. Take a red Sharpie and mark off the afternoon because you won’t want to miss a single minute of this always awesome day.

Acts are still being finalized though don’t be surprised if the final line up includes performers like The Not-Its or Elizabeth Mitchell.

Having attended last year, I loved the vibe in the room every time a band gets up to play. Not only were the kids totally into the music, but the room was filed with people who really know and adore this genre. And it’s funny to see grown-ups singing along to lyrics intended for a much younger listener. But, don’t worry: no one will think it’s weird that we’re as into it as the kids.
Though I wouldn’t try to get into the inner circle of kids dancing right up front: They’ll definitely kick you out. -Christina
Keep your eyes on the Kindiefest website for conference updates and the final lineup for the Sunday Showcase, along with ticket information for the show. For a little taste, find photos from last year’s show on the Cool Mom Picks Facebook page.
Tags: