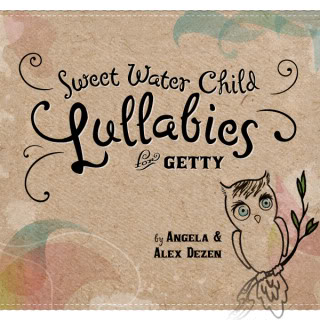 I, along with probably many of you, had never heard of Spinal Muscular Atrophy, though
it it is the number one genetic killer of children–1 in 40 people
unknowingly carry the SMA gene. When I read more about SMA1, the most severe form of SMA, and the likely
fate of “Getty,” the nickname for a sweet little baby afflicted with the disease, I had to put my head down on my desk and compose myself.

But when I
read that there is a very real chance that a cure or treatment for SMA
could be found in as little as five years, I felt hopeful. And I have to
tell everyone about this new CD since every penny of its proceeds will go
to helping find a cure for SMA.

Getty Amelia Storm’s story now has a beautiuful soundtrack created to help stomp out SMA1: A new lullaby CD called Sweet Water Child – Lullabies for Getty. It’s an absolutely lovely and touching collection of songs that you’ll want to hear while rocking your own night owl to sleep.
The way the CD came to be is one of those stories that makes me love the way the internet connects people with all my heart. Angela and Alex of the Brooklyn indie band The Damnwells, had been putting together a collection of their own lullabies and toying with the idea of publishing them. But, when they learned of Getty through the efforts of bloggers Stacey of Pill’s Place and Morgan of The818, they decided to turn their labor of love into a real gift of hope for all babies with SMA.
Lush and mellow, Sweet Water Child-Lullabies for Getty holds eleven little love songs of comfort, often with nothing more than a quiet piano backing or guitar strumming. Though most of the lyrics encourage sleep, this would be a great CD to put on anytime you just want to encourage some quiet time.

Though you’re a stronger person than I if you can get through the final song, All Of Your Fright, without needing a Kleenex. -Christina