The new 4moms Breeze play yard is worth marking your calendar for now! 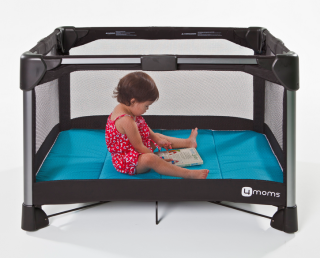 With four kids, all of whom slept for many years in a play yard, I’ve seen and owned my fair share. So when Cool Mom Picks got the exclusive first look at this new play yard from the inventive company 4moms, I was pretty skeptical it would top all the good choices already out there.

Now let me say, it’s worth marking your calendar for the launch, because it’s just that cool.

The new 4moms Breeze is probably the most intuitive play yard (or playpen – does that make me old skool?) I’ve ever seen. With just one push down on the center, the Breeze pops into place; then you simply pull up on the center latch to collapse it. That means no messing with side bar buttons or worrying about whether you have to pull up the center first and then collapse the sides — that can’t only be me right?

Because of this, you’ll notice the side bars are not as thick as most on the market, but they’re still completely sturdy.

I really love that it comes in the gender-neutral combo of a sleek, modern black with a thick aqua mattress pad. It also means this is one piece of baby gear you can put in your family or living room without feeling as though your lives are being taken over by technicolor.
I will say that the 4moms Breeze doesn’t seem any more or less comfortable for my little one than others that I have used, and it’s definitely heavier for travel and slightly bulkier in a collapsed position. But that’s more of an observation than a complaint really–because given how much of a breeze it is to use at home, you won’t even think about those things. -Kristen
You can pre-order the new 4moms Breeze at 4moms.com starting 8/20. Mark your calendars!
Tags: baby gear, baby gifts, cribs