How to talk to kids about the Boston Marathon tragedy: A list of great resources 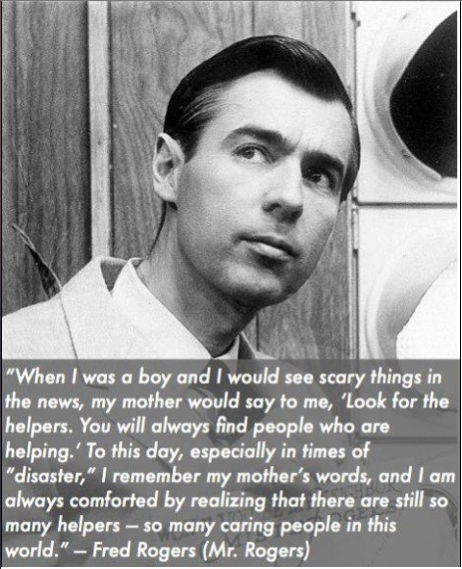 As a runner who lives just south of Boston, and whose husband spent his lunch break photographing sites at the beloved Boston Marathon that ends mere blocks from his office, yesterday’s tragic events all hit way too close to home.

Like so many people, wherever you may live, I spent yesterday afternoon fighting back tears, checking my Twitter feed, sneaking glimpses of the news when the kids were outside playing, and feeling sick over what had happened. Then, I turned to the internet for help.

Mr. Rogers
Since it was impossible for me to come up with something meaningful to say to the kids other than, Daddy’s okay I relied on the words of Mr. Rogers that sprang into my mind as I watched emergency personnel sprint toward the smoked-filled areas:

Common Sense Media
For kids who are old enough to talk about what they heard or saw, Common Sense Media has some smart advice about how to talk to kids about tragedy on the news. This is especially important for younger kids, like my son, who was worried a bomb was going to hurt us because we don’t live too far from Boston.

PBS.ORG
For younger kids, PBS offers strategies for talking to children about the news that are extremely helpful–a lot of it comes down to listening carefull and offering reassurance.

AAP and APA Recommendations
And though it hurts my heart to point to another news story that feels way too fresh, some of the advice in our How to talk to kids about the Sandy Hook Elementary School Shooting will also be helpful in talking to kids about yesterday.We particularly like the AAP recommendations on talking to children about disasters as well as simple advice from the American Psychological Association.

US Department of Health
Here’s a comprehensive PDF on tips for talking to children after traumatic events, sorted by age. Keep in mind if you have a kindergartener and a fifth grader, you don’t have to talk to them together; they’ll have different questions and different needs.

National Association of School Psychology
Great reminders here on tangible things that schools and parents can do for kids in the wake of disasers, not just now but over the course of the week.

Then hug your family a few extra times today.