Lisa Loeb’s kids’ music gets you ready to move and shake. (Yes, you too.) 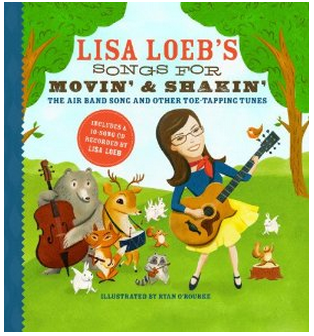 I’ve been a fan of Lisa Loeb’s voice ever since her days singing 90s hit Stay, but I really fell in love with her when she crooned the lovely, mellow Catch the Moon album for babes with Elizabeth Mitchell.

Now Lisa’s back with a bunch of kids’ songs that aren’t made for napping, but for getting up and moving. And shaking. And yes, dancing. Get those smartphone video cams ready.

Lisa Loeb’s Songs for Movin’ & Shakin’ includes ten tunes for doing just that. Half of the songs are originals like Turn it Down (The Air Band Song) that’ll have your kids pretending they are in their own indie band. And songs like Monster Stomp and Everybody Wake Up will rouse the house–and probably the neighbors, too.

The CD itself comes nestled in a nice hardcover picture book gorgeously illustrated by Ryan O’Rourke. I love that there are lyrics for each song, especially the classics, which I was a little rusty on.

No worries if you’ve forgotten how to play Miss Mary Mack, because instructions are included for all of us with parent-brain. And songs like Head, Shoulders, Knees, and Toes can be played by kids without any parent prompting…if they can keep up.

In the middle of all the jumping and silliness is her original song Hello, Today, which is simply lovely with quiet guitar accompaning her voice. It’s a bit more meditative, with quiet yoga poses outlined in the book. Put it on whenever you all need a little break from the crazy of the day, and then get back on track for more movin’ and shakin’. –Christina