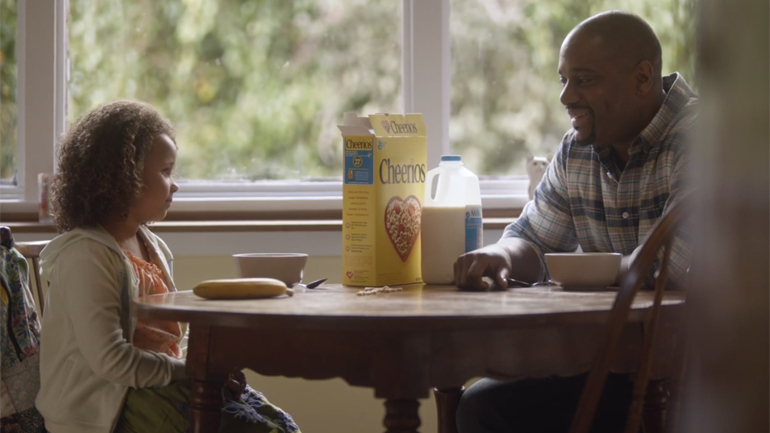 We’ve come a long way, baby, from the days when Super Bowl ads necessarily meant the Swedish Bikini Team and disconcerting depictions of women with anthropomorphic animals (RIP Spuds McKenzie). Now, some of the best Super Bowl ads in 2014 portray parents in a progressive, positive way.

Hands down, this was commercial that lit up our Twitter stream the most last night from parents. I love the depiction of an engaged father over the breakfast table, letting his daughter know that a new baby is coming. It’s so charming, that I even forgive the easy, overplayed joke at the end where the dad agrees to a puppy and the mom throws him an, “oh, really?” look. Still, overall you’d have to be pretty Scrooge-y not to like this ad. And I sincerely hope that we get to see the next installment of the series, when the baby is flinging those Cheerios all over the house. As long as we’re talking about real world families and all.

How nice to finally see an ad in which a dad is engaged and aware and protective throughout his kid’s life, saving him from various perils each time. But the vignette that struck me most was the playground scene, in which his quick reflexes save a toddler from near swingset disaster. What parent among us hasn’t been there? While we all know that moms save the day plenty of times, it’s refreshing to see a reminder that plenty of dads do too. But geez, however great the Hyundai is, if you know a dad who’s that chill after his teen nearly crashes it, we’d like to meet him.

I dare you not to be moved by this depiction of just what technology is doing for kids, for families, for medicine, all narrated by a computer voice speaking for former Saints safety Steve Gleason who is living with ALS . But the final kicker is of course the shot of  Gleason at the end, who’s not just identified as a former NFL player, but as a dad too. It’s lovely to see more and more dads inextricably tying fatherhood to their identities the way mothers have for years.

This is the one spot that I’m surprised isn’t getting more attention, and may in fact be my favorite of all. It’s a beautiful salute to the friends, fans, and of course, parents who contribute to players’ successes. I unabashedly teared up at the poignant shot of a dad hugging his adult son with pure love and pride after his son opens a college acceptance letter. But I could hardly believe my (teary) eyes when I saw a mother comforting her uniformed daughter in the rain after a losing game, assuring her, “better luck next time.” Because yes, girls like  Samantha Gordon play football too. And yes, moms care about their children’s games.

The fact that the NFL made me feel genuinely emotional about a sport I hardly care about says a whole lot. But if my daughters were suddenly interested? I’d be right there with them, together making football.