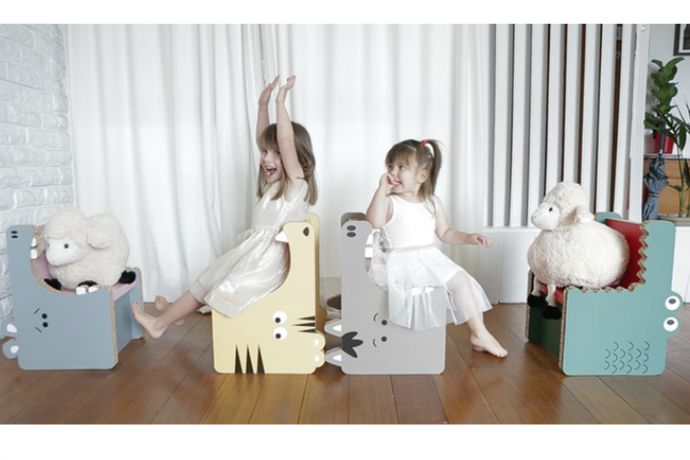 I have long loved finding unique, eco-friendly, and easy-to-assemble cardboard furniture and toys for kids. But while most of the cardboard items I’ve found to date are unfinished, I’m so intrigued by a new company on Kickstarter that marries adorable kid-friendly design with cardboard to create room-ready pieces.

Gobble by Form Maker is a brand-new line of cardboard chairs and room organizers from Australia that you can quickly assemble to add a whole lot of personality to your child’s bedroom or playroom. The cleverly designed pieces which feature four toothy animals–Croc, Hippo, Tiggy, and Horsey–appear to “gobble” up the child sitting in the chair or the books lined up in their mouth.

In addition to the animals, I like the two simple organizers in blue or green that can hold anything from books to toys. They go together nicely with the chairs but will also look good in an older child’s room on their own.

Though they are made of cardboard, the pieces look like they”ll last. They can even hold the weight of a grownup who might be invited to join an impromptu tea party. And since sticky fingers are a given with kids, I like that the surfaces can be wiped clean with a damp cloth.

Best of all, the non-toxic adhesives and water-based inks mean the pieces can go right into the recycling bin when your kids have outgrown them. And then let Mother Nature gobble them all back up.

Check out Gobble’s Kickstarter campaign which has many special incentives for early supporters, including the ability to have whatever animal you choose made into a chair! Narwhal, anyone? The campaign ends August 18th, and items are expected to ship by November 2015.