How a regular mom ended up in A Bad Moms Christmas. Maybe. 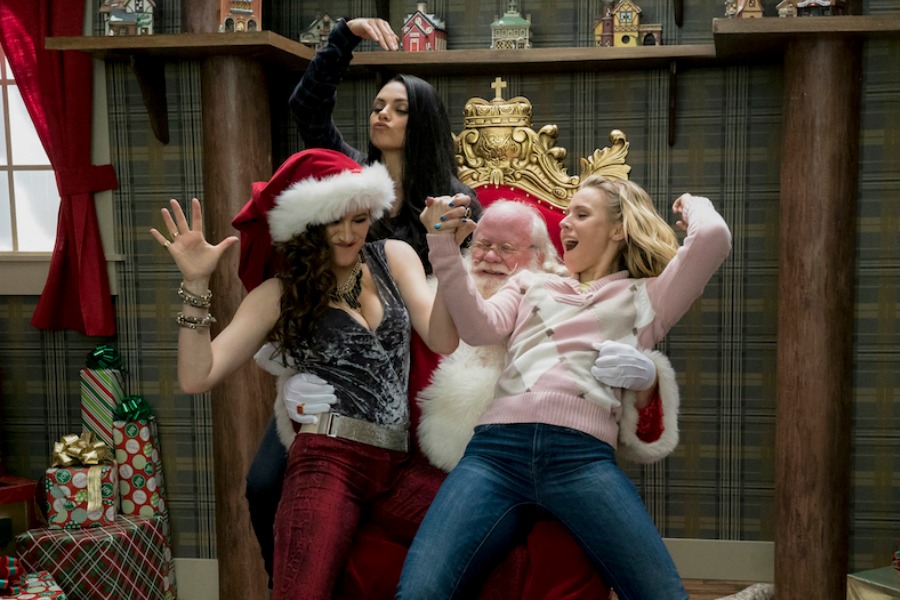 When you’re going to film a scene in A Bad Moms Christmas in balmy Atlanta, but it is actually supposed to take place in Chicago at Christmastime, you pack coats. And scarves. And boots.

Maybe even more than a few pairs of boots because you’re thinking, “OMG Kristen Bell and Mila Kunis and Kathryn Hahn could totally be judging me for my shoes.”

And that’s how I started my trip to to the set of A Bad Moms Christmas (opening tonight!) where I was slated to play the role of “extra” in the sequel to 2016’s guilty pleasure cult hit, Bad Moms.

Seriously, look for me in the credits. I’d like to think that I played the role of “Pamphlet-Reading Mom Who Accidentally Smashes into Carla” but something tells me I’m not going to get that kind of billing.

Related: 8 shows to binge watch when the kids are asleep. 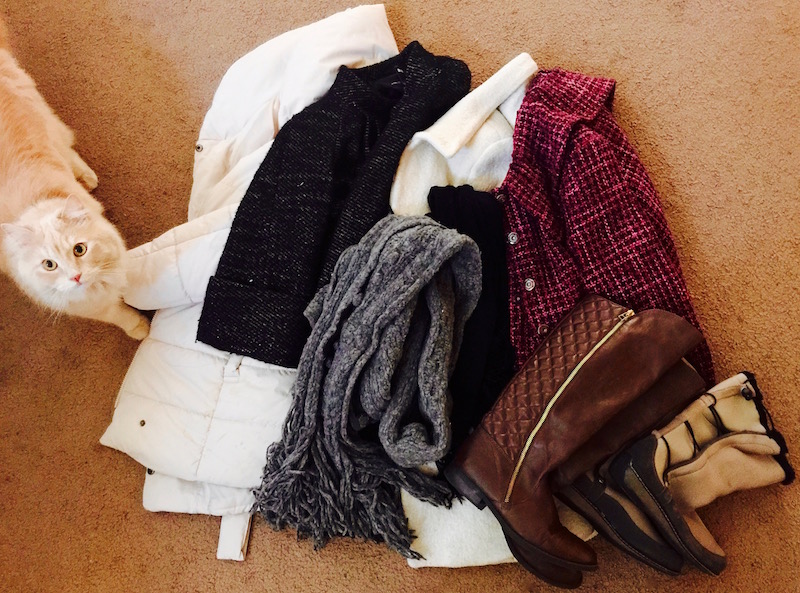 Winter in Spring in Atlanta. Actual cat shown for size

Once on set with my off-season clothes, things start happening very quickly.

If you’ve never been on a movie set, the first thing to know is that people wear headsets and move with purpose in every direction. Headsets are the universal signal for I’M VERY IMPORTANT HERE when you’re on a shoot, so I learned quickly to step aside when someone walking hurriedly wearing a headset, head down toward a phone or a clipboard, barrelled toward me.

In the industry, extras jokingly referred to as “moving furniture” because we are just that important. But hey, there are a few perks.

A seat in hair and makeup! Hair curled into ringlets! Free M&Ms at craft service! 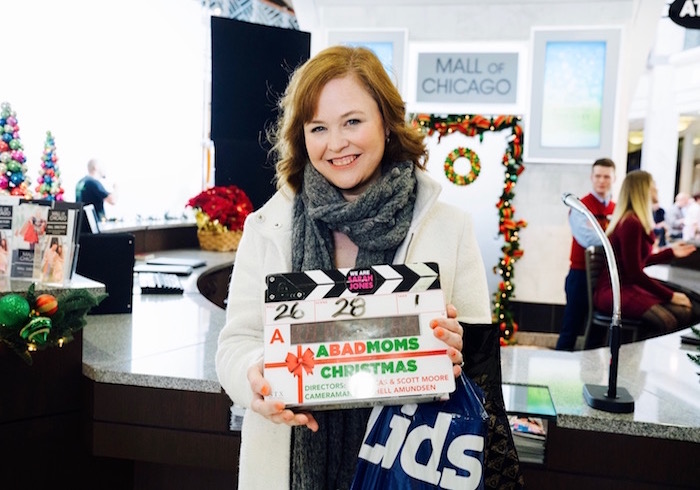 Not pictured: Faux fur-lined boots and rivulets of sweat.

My direction as Pamphlet-Reading Mom Who Accidentally Smashes into Carla was to stand in front of a kiosk in the mall and pick up a pamphlet.  I am to read the pamphlet, nod approvingly at the pamphlet, then carry the pamphlet off camera, crossing in front of Mila, Kristen, and Kathryn (we’re all on first-name basis now, of course) as they walk to the spot I had been standing to deliver the lines.

Let me just say that between the hot lights, the sweat pouring through my clothes, a camera in front of my face, and what feels like hundreds of crew members and other extras…I have never been more doubtful of my pamphlet-carrying abilities in my life.

To say nothing of my ability to walk four steps out of frame.

Let’s say even my brief experience gives me a brand new appreciation for professional actors who have the ability to do what they when they’re cold, wet, or yeah, wearing ski clothes when it’s about 120 degrees under hot lights, all with so many people looking on.

I somehow manage to do what I’m supposed to do for six or seven takes. So far so good!

But on the next take, I am walking off screen while still staring at the pamphlet, and because clearly this is too much for me to handle at once — I walk right into Kathryn.

She stumbles into me and beautifully plays it off, because she is a professional actor who is awesome and did I mention professional?

That’s when the director calls “Cut!” and I know I’ve ruined the take.

Fortunately it turned out to be NBD. The scene is reset and we shoot it about ten more times before the crew moves onto the next one.

And that was my big breakthrough moment.

Will it make it into the final cut of the movie? I have no idea until I catch it when it opens November 1, but I hope so. If you want to keep an eye out for me, here’s a handy cheat sheet because I know you will be spending the entire film not being able to relax or eat popcorn or ANYTHING until you spot Pamphlet-Reading Mom. 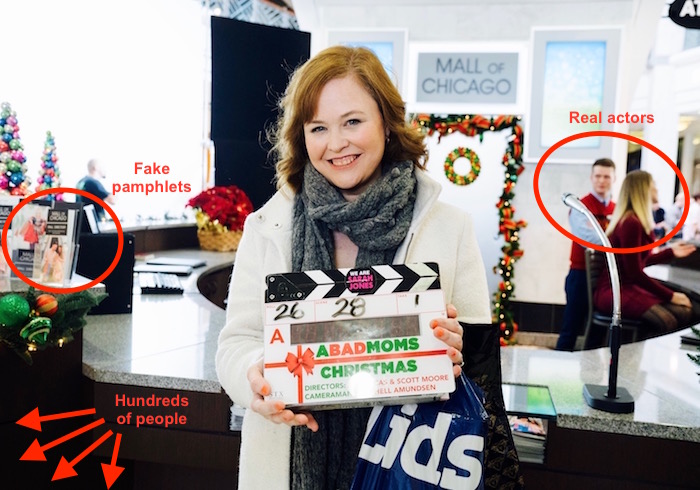 As famous as I may end up being with my massive scene-stealing pamphlet reader performance, I know you’re all more interested in the actual stars of the film.

I did get some time to chat with Mila, Kristen and Kathryn who were all lovely. And I’m so grateful for their time because they had been up until 6 a.m. filming and were obviously tired. But as we talk — and later, as I watched them work into the night — what was most obvious is how much they clearly love each other.

And how much they clearly love being moms. (Sniff.)

I suppose that helps a lot when you’re making a movie about moms who have moms (here played by the likes of Christine Baranski and Cheryl Hines), and about moms who are doing their best to “make magic for everyone else,” as Kathryn explained to me. 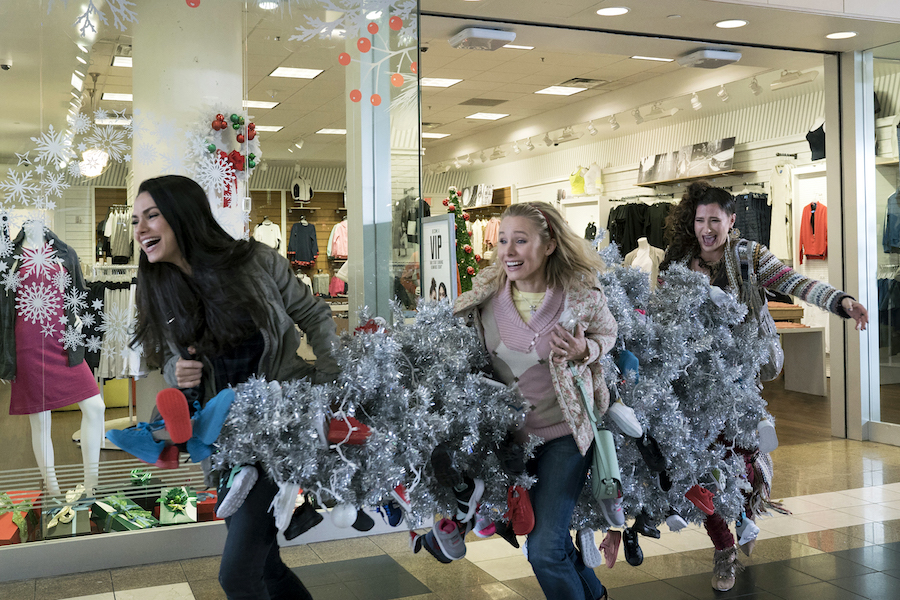 Bad as they want to be.

In other words, bad moms are are really just imperfect moms with good intentions. As are we all.

Unfortunately I couldn’t get any blurry iPhone shots for you all; the moving furniture was under strict orders not to take behind-the-scenes photos, record, film, tweet, Facebook or Instagram. Because #spoileralerts.

So I dutifully waited until today to share all this with you. Because deep down, I’m a rule follower. I’m not a bad person and I’m definitely not a bad mom. Even if I am a not-entirely-great pamphlet-reading extra.

You can catch A Bad Moms Christmas in theaters November 1. Definitely not one for the kids.

Thanks so much to STX Entertainment for including Cool Mom Picks on the press junket, arranging my travel and lodging, and much gratitude to the entire cast and crew of A Bad Moms Christmas for sharing their time with me and letting on set as background talent.