How to help the victims of the Australian fires, because you always have the biggest hearts in times of need 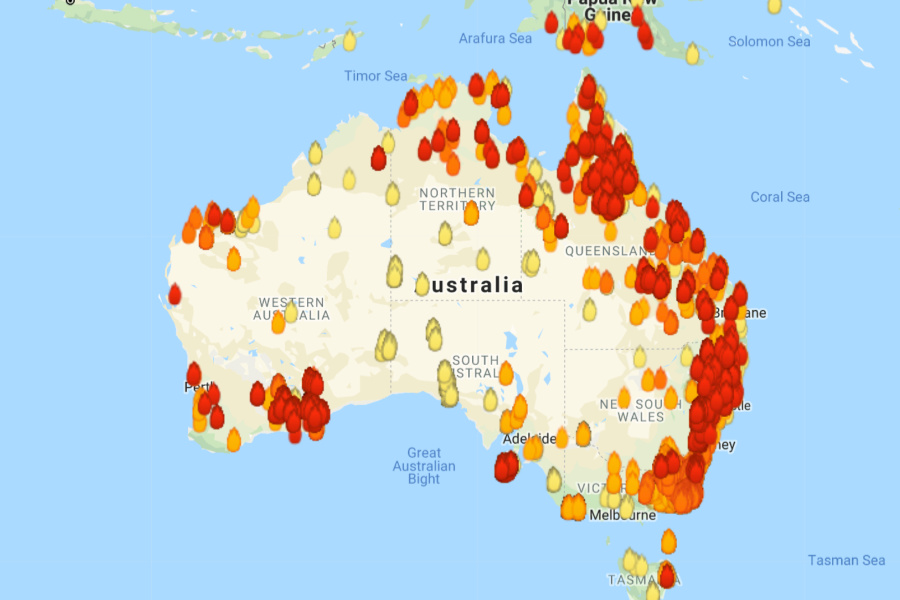 When I shared the news about the 12 million acres destroyed (so far) and thousands displaced in the current Australian fires, my always-on-social-media daughter was shocked. Why hadn’t she seen this? And what could we do to help?

Well, why haven’t so many of us seen the photos or news of the devastation? I mean: The fires outside every major Australian city. The smoke damage drifting as far as New Zealand turning the Aukland sky orange. The hundreds of homes destroyed and families displaced. The tens of thousands evacuated by sea. The fire tornadoes and dry lightning. The international fire brigades from as far as Canada, flying out to support the local firefighters. The deployment of military planes and ships to provide aid. And of course, the human lives lost, the families who have lost homes, and the half-billion animals already killed.

That includes koalas, my favorite animal, which are already 95% extinct.

It’s all heartbreaking. Every bit of it.

In Sydney and Canberra, the air quality is reportedly 11 times more hazardous than the “hazardous air quality” level, with millions choking on smoke.

This is what climate crisis looks like. Right here, right now.

This is the situation in Mallacoota at the moment. A mother and her kids are sheltering in their boat on the water. People are reporting the sound of gas bottles exploding in town and quite a few homes have been burnt. @abcmelbourne #gippsnews #gippslandfires pic.twitter.com/XhS5SVvgqX

Our readers have the biggest hearts, and every time there is a natural disaster, or people in need, we hear, “what can we do? How can we help?” May this list be a start.

A big, grateful h/t to Feed Our Democracy, ABC Melbourne, Pink, Indy 100 and tons of friends and readers sharing resources.
Also to The Sydney Morning Herald which is keeping all brushfire news and updates free and available online to the public.

With a big h/t to Glennon Doyle, Feed our Democracy, The Guardian, and benevolent individuals across the web.

Please note that Australian charitable donation sites are set up a little differently than those in the US; you can make donations directly to bank funds (with relevant numbers provided and generally details for international transfer), or the traditional way, with credit cards or through PayPal. Some of the sites are fairly grassroots — not big orgs — and there may be a few more steps to be able to donate using an International address.

Also note that some sites take some time to load, or aren’t mobile optimized. Be patient. It’s worth your time. 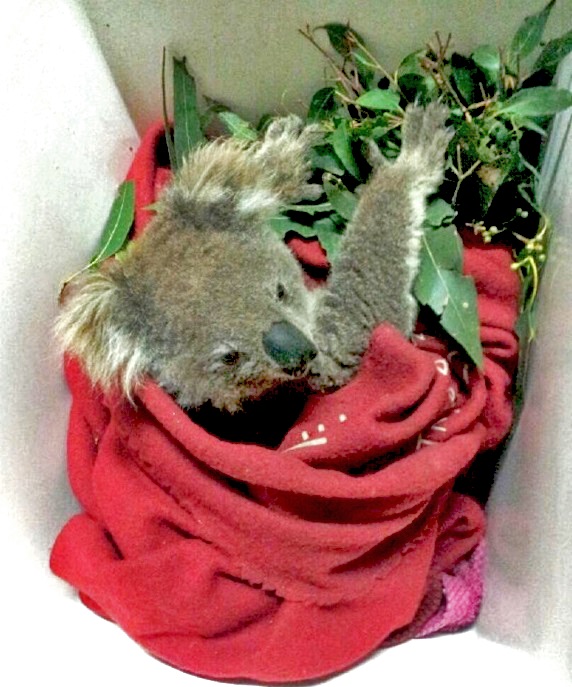 This is the org that my family wanted to donate to first. We’ve been big supporters of the WWF in the past, but at the time of publishing, we could only find a dedicated initiative for the Australian brushfires through the Australian site. They’re restoring homes and supporting wildlife, with an emphasis on koalas — after the brushfire crisis, they aim to plant 10 billion trees over the next 10 years, to fight eastern Australia’s heinous record on deforestation and to restore the habitat of koalas who are now 95% extinct. They estimate as many as 2000 additional koalas have already died in these fires with more injured and homeless.

The Wires Emergency Fund dontion page of this non-profit offer some shocking details about the devastation to wildlife in Australia from the brushfires. In December alone, they received over 20,000 emergency calls, with WIRES volunteers attending more than 3,000 rescues. They are trying to support animals including koalas, grey-headed flying foxes, which are already listed as vulnerable to extinction.  They also have trained wildlife rescuers looking to protect other protected native species, including injured or orphaned kangaroos, wallabies, wombats, lizards, turtles, possums, parrots, kookaburras, and more.

Kenny, in the photo above, is a koala who was rescued from the Bilpin fires just before Christmas.

They are benefiting all local brigades, mostly comprised of volunteer firefighters in North and South Wales. Scroll through their up-to-the-minute fire updates or check their Instagram feed and you’ll see just how much they’re dealing with, and how much your help matters. Celeste Barber is hosting a fundraiser through her own Facebook page and has already helped to raise $20 million. Wow. It’s  personal for hers; she’s posted the terrifying view out her mother-in-law’s window on Instagram before she was evacuated

My last day of the decade felt like the apocalypse. Been covering the Australian bushfires for the last 6 weeks, but haven’t seen anything like yesterdays fire that decimated the town of Conjola, NSW. #bushfirecrisis #AustralianBushfires #NSWisburning work for @nytimes

Founded in 2001, this respected non-profit provides immediate financial support to the volunteer firefighters and their families who have been injured or killed in the course of duty. Donate directly through this link.

Donate directly to the bushfire appeal through the Community Enterprise Foundation (CEF), a partnership between the Victorian Government, Bedigo Bank, and the Salvation Army. 100% of donated funds will go directly toward relief and recovery inn affected communities in Victoria. To support specific brigades,  CFA also provides bank info, but you need to provide the brigade name and number.

This Queensland association represents the interests over 1400 brigades, incorporating more than 33,000 volunteer members across Australia’s “Sunshine State,” where there is currently multiple States of Fire Emergency issued. You can donate generally to the association, or support a specific Queensland brigade directly. The QLD fire and emergency twitter feed provides a sobering look at ongoing brushfire developments.

Our strike teams have been busy this weekend helping our NSW colleagues. This is the view from the cabin of one of our trucks at Wandandian on the NSW south coast. #nswfires pic.twitter.com/xpMkfOIKfC

The Red Cross, as always, is helping provide relief to displaced residents across Australia with a dedicated appeal for disaster relief. They are helping to support thousands currently living in evacuation centers, while establishing and supporting recovery programs. We know that the Red Cross can be controversial in terms of donations in emergency situations; to provide you with more information, you can look at the financials in their 2018-19 annual report if you are interested.

This advocacy organization works to combat poverty and inequality across Australia, including refugees, migrants, and indigenous peoples, and is currently on the ground providing impactful support to displaced families. (Their mission and activities seems comparable to Goodwill in the USA.) Vinnies’ dedicated Australian Bushfire Appeal page indicates what your donations can do: $50 provides food to an evacuated family; $150 helps with bills and unexpected expenses; $300 provides clothing for a family who escaped with no belongings; $1100 can help set up a new home. Of course any amount is wonderful. 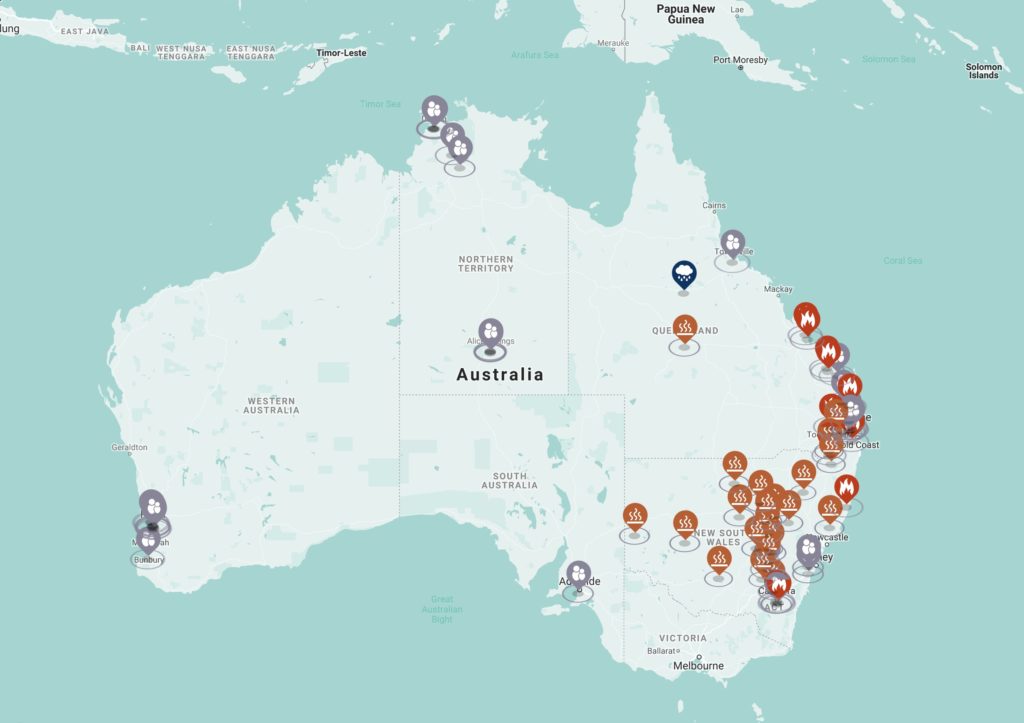 GIVIT’s current campaigns in Australia, including brushfire relief, drought relief, Queensland flooding, Indigenous support, and a back to school appeal

Based out of Queensland, GIVIT is collecting specific items and services of need for evacuees locally; internationally, the accept donations to support their work. You can direct your donation specifically to efforts including Books for Brushfires, QLD Fires, and the Star Bushfire Appeal (among others, though those are brushfire-specific campaigns) and 100% of funds received support people in devastated communities.

Another solid animal rescue organization with a dedicated Bushfire appeal, your donation will help residents of northern NSW protect their pets and livestock, because it’s not just wildlife that’s impacted. However they also are rescuing and treating native wildlife in the area, because it’s the RSPCA.

Together Rising is the impressive not-for-profit established by Glennon Doyle and Abby Wambach, donating 100% of every personal donation directly to people impacted by emergencies. They’ve pledged $100,000 in relief to those affected by the Australian fires, and through Sunday night, 100% of every personal donation will be dedicated to Australia. They’re currently vetting organizations to determine the organizations that a can put the money toward the best, most impactful, most urgent use. 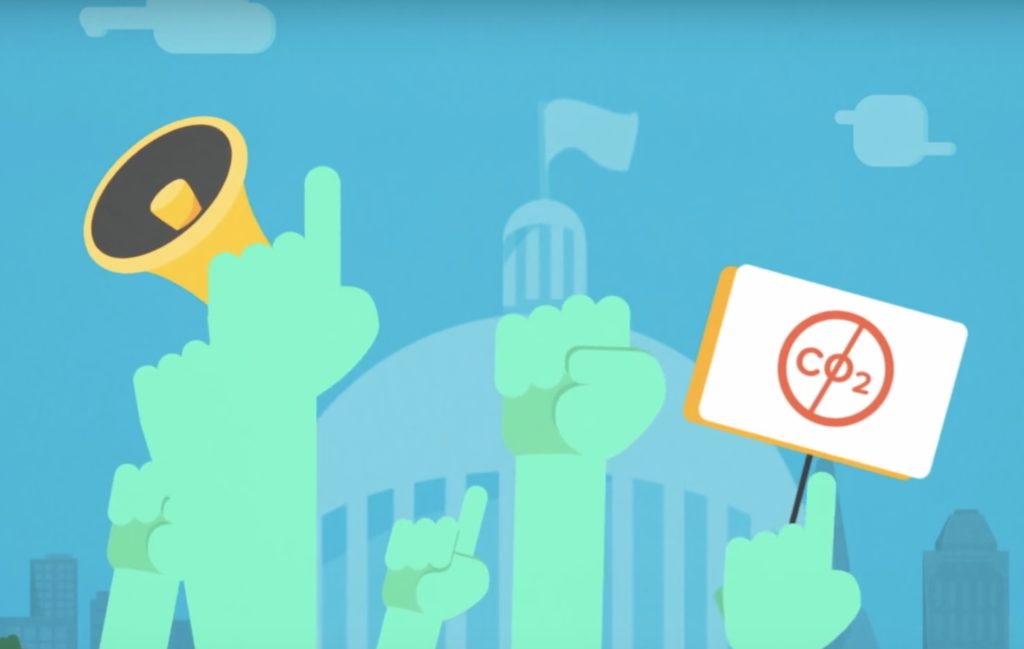 As climate scientist Lesley Hughes told Time Magazine, the wildfires, as well as Australia’s ongoing drought and a drastic heatwave, are a visible, tangible result of climate change.  With the government “not accepting the link between climate change and bushfires as fully as they should,” she said, “we’re not getting sufficiently prepared to cope with the problem.”

We’d rather not be sharing more stories like these in the coming years. Please consider also researching what you can do with your own family to help the planet.

You can also contact your elected officials to let them know that combatting climate change and protecting our planet is of urgent importance to you. I know it is to all of us.