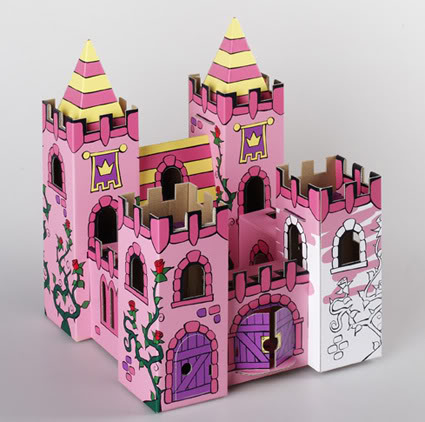 In concept, I’m all for kids making and decorating their own toys. But the fact that they generally involve sharp, pointy tools along with paint that does not come off  with a simple bar of soap sort of puts a damper on my plans.

But Calafant cardboard toys? That’s most definitely my kind of DIY. These European cardboard toys come in every variety, from cars to rockets, palaces to pirate ships, all of which require no more than your own two hands and some family time. You don’t even need scissors. Or glue.

Your kids can decorate them with the included markers or their own crayons and paints. When the toys are played out or outgrown, just pop them in the recycle bin. Awesome. -Kristen

Congratulations to Janet F, winner of the Rosegarden Palace!