Whereas I take back all previous skepticism about Yo Gabba Gabba! 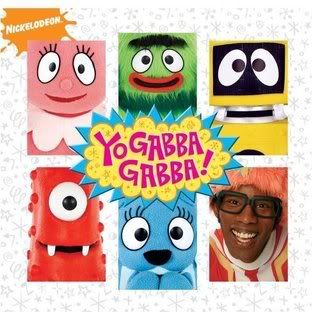 If you had asked me about Nick Jr’s Yo Gabba Gabba! a few months ago–unlike editor Liz who’s their biggest fan on the planet–I would’ve told you, I don’t get it. However I am now writing enthusiastically about the Yo Gabba Gabba! soundtrack from the first two seasons of the hit kids’ show which is now available for download through iTunes.

Kicking off with the infectious tune Party in My Tummy (so yummy, so yummy), this soundtrack has a little bit of everything: thumping hip-hop beats, peppy indie pop melodies and sweet messages for kids like those found in songs like Be Kind to Animals from the Saltines, and The Roots’ Lovely, I Love My Family. I’ve even heard my kids (and maybe me) trying to imitate Biz Markie’s “Biz’s Beat of the Day” which gives me new respect for those who can make beatboxing sound good.

I still may not be able to pick out Muno from Brobee in the television show, but I’m happy to have my kids on a solid path towards cool music appreciation courtesy of their tunes.

Download the Yo Gabba Gabba! soundtrack from iTunes, or as a CD-R at Amazon.