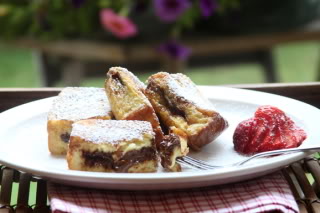 It’s only February 5, and my New Year’s resolution to eat healthier is about to be severely tested: It’s World Nutella Day!

To celebrate, I’ve pulled together a few super easy recipes that sound perfect for today, or really any day in which a jar of that creamy chocolate-and-hazelnut goodness is in the house. We’ve even got a homemade version that sounds delish if you’d rather go the DIY route.

Nutella for breakfast (on VERY special occasions) is a sure-fire way to get my kids to think I’m cool for about 30 minutes. ShowFoodChef’s recipe for Nutella-stuffed French Toast (at top) on Food52 looks totally delicious. And while it looks like some real magic must have occurred to get the Nutella inside, it seems I could actually pull it off, even before my second cup of coffee.

Don’t want to mess around with a gazillion ingredients? How about three? I love how Tracey’s Culinary Adventures has adapted a super-simple recipe for Nutella Fudge Brownies and made them into kid-friendly cupcakes, no frosting needed.

My sister swears that crepes are as easy to make as pancakes, though I’ve always been chicken to try to make them myself. But now that I’ve seen this recipe for Banana Nutella Crepe from Fahrenheit 350, I may need to get over my fear of the crepe.

Forget the candy hearts, I want to make some of this Chocolate Hazlenut Bark for Valentine’s Day this year. I think the Nutella melted into the dark chocolate sounds ridiculously rich, but I’m willing to take a chance on love. (from Make and Takes)

If the view outside your window looks as cold and snowy as mine, than you may want to join me in a hot mug of Nutella Hot Chocolate. Though not as much a recipe as a “why didn’t I think of that?” reminder from One Hungry Mama, this is a no-brainer for the next snowstorm. (from Babble)

Don’t have Nutella at your store? Then get out your Cuisinart and try Healthy Green Kitchen’s Homemade Chocolate Hazlenut Spread recipe. A little less sweet than the jarred stuff, it also happens to be vegan which will go over big with my dairy-allergic daughter. Added bonus? Someone gets to lick the bowl.

Editors Note: Boy we love Nutella! That said, don’t even think about looking at the nutritional recommendations on their website which are patently absurd. Nutella is a tasty “sometimes treat” but with high fat and sugar content, it’s hardly part of a balanced breakfast.