The Kids Grow Up… way too fast 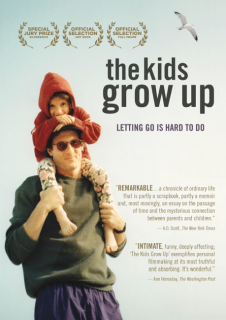 As my oldest daughter fast approaches her 7th birthday, I have become more acutely aware of how fleeting childhood really is. And the urgency to bask in her little-ness is now even more present after seeing a fascinating new must-see HBO documentary.

The Kids Grow Up is a documentary from dad and award-winning filmmaker Doug Block, who offers a rare look from a father’s perspective at the emotional side of parenting, as he chronicles his only daughter’s last year at home before college. (Something we all know is coming, but don’t really want to think about.)

Early in the film, his daughter Lucy suddenly becomes your daughter (or son), and you find yourself looking into a sort of crystal ball as we watch her grow up and the story comes together. This is a credit to the fantastic editing that in part makes this film so brilliant.

Block’s raw, honest, and sometimes funny narration draws you into his own experience of this final year–exploring his relationship with his own father, enduring his wife’s first major depressive episode in 13 years, sitting (rather uncomfortably) with his teenage daughter and her French boyfriend. It’s all captured in simple interviews that make you more aware of the nuances of your own children’s daily life and craving to capture them before they quickly slip away.

As Lucy challenges him to put the camera down and actually experience those final few weeks, I was transported back to the times that my own father would follow me around with the camera and I would wave him away, embarrassed and annoyed. Oh how I love those videos now. Turns out he knew something I didn’t. -Kristen

You can watch the broadcast premier of The Kids Grow Up Father’s Day on HBO (check your local listings for exact times) or pre-order the DVD available on 7/19.

🎧 Warning: this conversation may make you miss