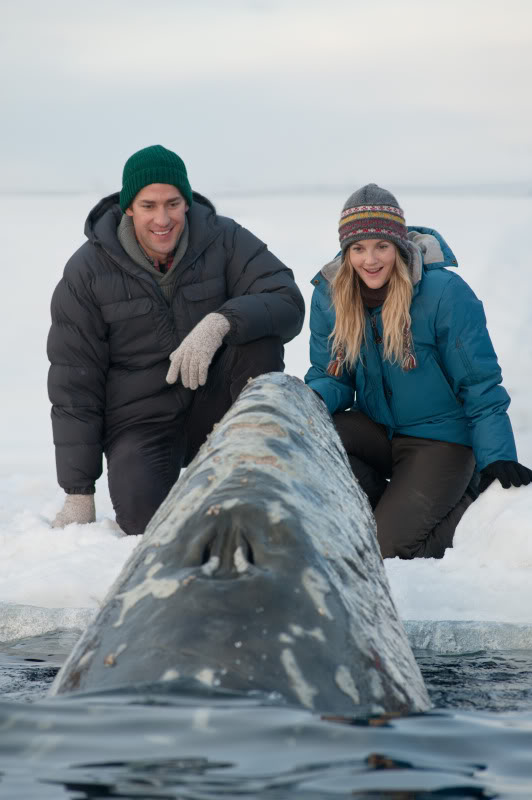 Like me, you may have seen the Big Miracle ads on TV and thought–hmm, that could be kinda cheesy. So I was frankly a little surprised to find myself at a preview screening, laughing out loud, wiping tears (shhh) and thinking, wow, my kids are going to love this.

The film is based, with surprisingly little dramatic deviation, on
the true 1988 story of a family of three grey whales trapped under the
ice in frigid, sleepy Barrow, Alaska, and how an unlikely crew of
ratings-hungry journalists, Inuit whalers, oil moguls, Greenpeace and even the
government converge on the town to do something about it.

The story itself is particularly compelling in that it’s true, and the performances that director Ken Kwipis (The Office, Sisterhood of the Traveling Pants)
brings out are genuine and enjoyable: Drew Barrymore as a bleeding-heart Greenpeace
activist; Jon Krasinski as her charming ex-boyfriend, the local
newscaster who breaks the story and keeps the peace in the aftermath; Ted Danson in an ironic role as a
millionaire oil tycoon; Kristen Bell as an ambitious blonde
LA newscaster who’s woefully out of place in a climate that requires
10,000 calorie meals to keep warm.

Dermot Mulroney is excellent
(and uh, extremely cute) as the Alaskan National Guard colonel who gets
things done with his determined White House Counterpart played by Vinessa
Shaw–but it just might be 12 year-old native Alaskan Ahmaogak Sweeney
who steals every scene he’s in with a sweet authenticity and subtlety that’s so rare
in child actors these days.

As for that cheese factor, well, yes. There’s some of that. It’s partly because the storylines, as even John Krasinski mentioned to us, are often hard to believe–and yet they’re all true. There’s also quite a bit of exposition here, as any story
told through the eyes of media telecasts is bound to be. However I do imagine that spelling out what’s happening (“Three gray whales are trapped under the ice!“) will help children be able to better follow the story, even if it feels a little on the nose for adults. at times.

I don’t know that it’s a movie a lot of adults will rush out to see on their own, but Big Miracle
truly  is a perfect family movie. There’s not a kid who won’t adore it –I’d
say starting around 6 years old they’ll be able to follow the story and
appreciate some of the nuances of the characters. (It is rated PG but only for some language; truly nothing to worry about.) However there’s
plenty in there for grown-ups too.

The wonderfully comic moments from Danson and
supporting actors like Stephen Root, Rob Riggle and James LeGros keep things fun. And, all ye children of
the 80’s, you’re going to get a kick out of the retro references,
hairstyles and cameos, especially if like me, you actually have memories
of the decade. (Ahem Dukakis*cough.)

However what I like
best of all about Big Miracle is that it’s the kind of movie that can
get us talking as families–what is our obligation to the planet? What
can we do as individuals? Can one person really make a difference? In
fact, I’d really like to read Tom Rose’s original book now and get to know more–or at Ted Danson’s suggestion in our interview, send a little more time at Oceana.org with the kids.

And that’s something that all those 3-D animated blockbusters generally don’t inspire in me. –Liz

I had the opportunity to sit down and interview the cast, so I
thought I’d offer up just a few fun highlights from the interview:

-The
cast spent 3 months up in Alaska where temperatures were less than
tropical. Weekends and down time were spent touring cities like Fairbanks, hiking,
sightseeing, doing hot yoga (Drew) or locked in John Krasinski’s room playing poker. Something
tells me Kristen Bell won more than she lost.

-Yes John Krasinski is adorable in person but no, I will not tell him you love him. And this Brown grad is wildly smart too. I loved hearing him talking about having a voice, particularly via social media, and how, “one tweet, one Facebook page, one anything can start an entire movement for your charity. You can get a pothole filled on Main Street…or you can go all the way and start a revolution.” Interestingly, though, he’s not on Twitter yet. (Maybe his colleague Rainn Wilson can offer a few tips?)

Because of his long-standing relationship with Ken Kwapis from The Office, he broke the fourth wall, mugging right for the camera on the first take as Jim might do. Kwapis got a kick out if — mostly.

–Drew Barrymore actually jumped in the freezing cold water herself in one intense scene. No stunt double SCUBA diver. Super impressive. She clearly displays the same passion for film making that her
character does for her own job. In fact, she told me that when
she’s on set for 3 months, she goes offline, turns off the phone, and
delves into her character so completely, that her friends are only
allowed to get in touch via snail mail.

Also? That’s one gorgeous ring
she’s now wearing. (Since I know you’re wondering.) And yet, the one thing she says she values most in her life are her sweatpants.

–Ted Danson, as you might know, is a
real life oceanic activist and environmentalist, which makes it rather
ironic that he plays an oil drilling mogul. He also shares his favorite app on Cool Mom Tech, which you’ll definitely want to check out if you’re a seafood eater.

I asked him about whether the ends (saving whales) justify the means (oil guy wanting good PR for his effort) and he had some compelling things to say about understanding the perspectives and the humanity of even those he disagrees with. In fact, his assistant on set was the daughter of a local oil rigger. Clearly his take is what makes him such a diplomatic environmental advocate–and a great choice for this role.

–Kristen Bell is
charming, witty, and super smart, and I pretty much wanted to hang out with her for
another four hours after our interview. Keep an eye on her nails, which
are almost another character in the movie. Hilarious choice. I think she’s going to continue having an amazing career.

-I asked Dermot Mulroney about the challenges of being a full-time working parent
of young children, and I loved hearing him talk candidly about his heavily reliance on family and inlaws for support.
Don’t think that everyone in Hollywood has it easy. Or 14 nannies.

–Director Ken Kwapis has such a laid-back, midwestern vibe, he never calls “Action” – only “okay, go ahead.” I have to give him a huge fist bump for using very realistic, animatronic whales
and not relying on CGI. It makes a huge difference in the quality of hte production. All the actors agreed, confessing they were grateful not to have to play emotional scenes opposite a tennis ball against green screen.

-Without giving up any movie spoilers, the true story of former White House Cabinet Secretary Bonnie Carroll (played by Vinessa Shaw) could be a movie in itself. After you’ve seen the film, I’d suggest you research her and the incredible organization called TAPS that she founded, which offers incredible support to families of fallen soldiers.

-A reader of mine asked me to
ask John Krasinski if he might consider breaking character and playing the next
Bond villain. If anyone from MGM is reading, the answer is an emphatic yes.

You can catch Big Miracle in theaters starting Friday 2/3. Also, Watch and share the Big Miracle trailer on Facebook and Universal Pictures will donate $1 to Oceana.

Thanks to Universal Pictures for including Cool Mom Picks on this junket and covering some expenses.