The perfect book for a new big sister (lucky thing) 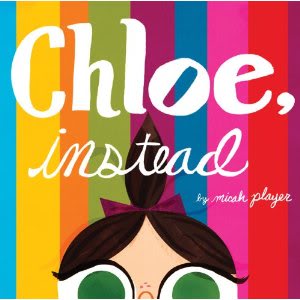 We get a lot of requests for books for kids about to welcome a new sibling into the family. Some of the better known titles are pretty sappy, which isn’t such a bad thing, but I never really liked the stories about how perfect it is to have a baby around. I’d imagine that if your kid is older than about two, they see right through that.

Instead, take a look at the new Chloe, Instead,
written and illustrated by Micah Player. It’s a vibrantly colorful,
gorgeously illustrated story; not surprising considering his past as a
designer at Paul Frank. What more surprising is how honest and wonderful
the story is for the 3-6 set. It opens with a doe-eyed big sister
plinking at a Casio keyboard, narrating, This is my house. At least it used to be…Now, it’s our house. You
can feel the venom as she narrows her eyes in annoyance at the little
fingers poking up to encroach on her musical interlude.

Don’t worry–it doesn’t end with the little sister duct taped to a chair
by her tormentor. In fact, the two girls come to find, rather quickly,
that it’s fun to play together, even if they’re different.

The very last illustration is a nice surprise, and such a sweetly
familiar sight in my own girls’ bedrooms, I admit it made me a little
teary. And it didn’t even require sap. Or postpartum hormones. –Liz

Find Chloe, Instead by Micah Player online from our affiliate Amazon or at your local indie bookstore.