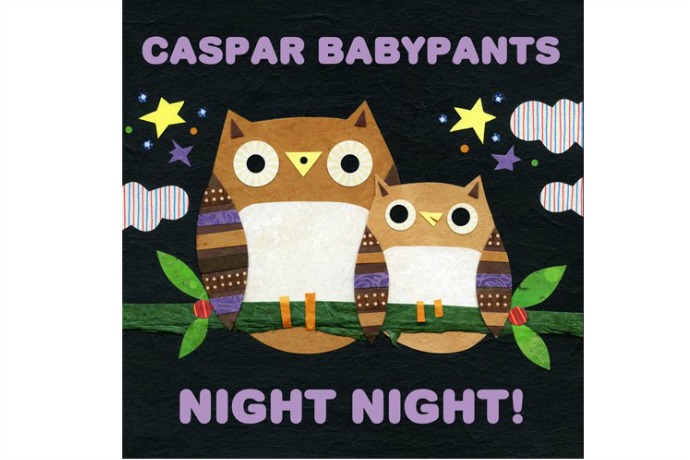 We have spent years sharing the very best in kids’ music so that our children can grow up with great tunes written for the person they are now—and not the person they are going to be in 15 years, or—if it’s a booty song—hopefully never. So keep reading for three new albums filled with beautiful music for babies to share with your very youngest listeners. And, because these albums are awesome, you’ll love hearing the songs too.

Long time kindie favorite, Caspar Babypants has created another great album for young kids, though this time at a gentler, slower pace. His new album Night Night! is filled with sixteen original songs for naptime, bedtime, or anytime you need things to slow down a bit.

Known to us grownups as Chris Ballew of indie band The Presidents of the United States of America, Caspar Babypants often sings catchy, high-energy songs like Stompy the Bear and I Wanna Be A Snowman. Instead songs like the slowly strummed Day Is Gone, The Land of Shush, and Just For You, with its lump-in-the-throat video, lull listeners of all ages. Just try listening to this entire album without nodding off once.

Throughout Night Night!, Caspar Babypants has taken the tempo down, quieted the instrumentation, and written songs that, thankfully, don’t have those stick-in-your-head choruses that we’ve come to expect from him on previous releases. After all, there’s nothing quite as frustrating as a child singing loudly from their room when they are supposed to be resting.

Vered’s first album Good Morning My Love was such an amazing debut and now her sophomore effort, Hello My Baby, is  easily as wonderful as her first. Like my children, it would be impossible for me to pick a favorite, so do yourself—and your baby—a favor and get them both.

Vered’s gorgeously light and tuneful voice sings light-pop songs about some of the best parts of parenting a baby: Their smile, insatiable curiosity, chubby cheeks, and delight in everything around them. Starting with Hello, this is the perfect tune for greeting our babies in the morning with its bright, sunshiny sound. Jump features a fun bouncy chorus that makes me wish I still had a gurgling infant on my knee. And songs like Cooking and Changing turn routine chores into fun, music-filled activities.

Her song Grandparents gives Grandma, Opa, and Nana lots of love with a cool old-fashioned sound. And I’m giving you a warning that Forgive is so touching ,you may find yourself sniffling before she’s finished the first verse.

I also appreciate that she doesn’t gloss over the harder parts about parenting, but it’s always done with sweetness and humor, like in More of a Baby, a duet in which mama and baby argue over who can act like more like a baby. All I Want is an ode to sleeping for seven hours in a row. And there’s such poignant feeling and frank honesty in Something Other Than a Mom, a song about the person we are beyond being a mother. As a parent to three kids born in under four years, I can certainly relate.

The melodic and dreamy sounds on Suz Slezak’s debut children’s lullaby album, Watching the Nighttime Come, make this one you will want to play at naptime or any mellower time of the day. Coming from folk and roots rock band David Wax Museum, Suz Slezak takes a different direction in her solo effort. But she has such a soft, pretty voice, it complements the ambient sounds and background music of this album.

The first song, Where Did You Come From expresses a touching sentiment so many new parents can relate to as we hold this miraculous baby in our arms and remind ourselves of just how lucky we are. I love her version of classic song Leather Winged Bat which gallops along without breaking the feel of a lullaby, and the six-plus minute Tallis Canon is mesmerizing and soothing. And her cover of Leonard Cohen’s Hey, That’s No Way To Say Goodbye is a beautiful and unusual song to close a lullaby album that isn’t afraid to take chances.