11 of our favorite classic shows now streaming on Hulu. Got about 200 free hours? 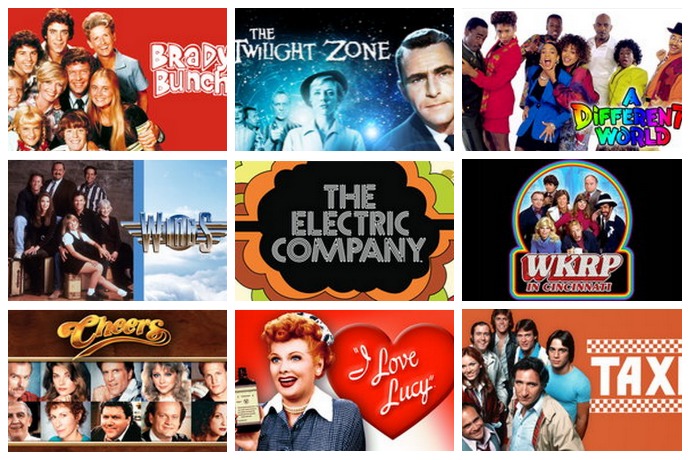 So by now, you all may know that we are pop culture junkies to varying degrees around here. We are also unabashedly nostalgic. Which is why our newest sponsor Hulu (yay, Hulu!) is pretty much making our days right now — or late nights, really — with their huge roster of classic TV shows available for streaming.  We’re not even kidding, you’re going to be so down the throwback TV rabbit hole after you see how many wonderful blasts from your past are available on demand, right now, this very second.

What’s even more fun is sharing some of our favorite shows from our own childhoods with our kids. Yes, The Brady Bunch still holds up. And you should have seen see Liz’s kids’ eyes light up the first time they watched The Twilight Zone and learned it was not just the name of some theme park ride. Or hey — you can be like Kristen and discover something totally new to you on Hulu that you always meant to watch, but never did.

So we asked our editors and contributors to share their favorite classic shows with us and, lo and behold, you can find every single one of them on Hulu right now. So take a peek! It’s perfect timing, considering we all need some new shows to watch now that other favorites have gone on hiatus for the summer.

Julie’s Pick
Words are not enough to express my adoration for the original The Electric Company in all its classic 1970’s glory. Did you know the Amazing Letterman was voiced by Gene Wilder? And Irene Cara was a member of the Short Circus? I credit this show for my fascination with words — how they sound and how they’re used — and my love for catchy beats. Plus, hello Morgan Freeman! This is one show kids will still love today.

Christina’s Pick
It already was a “classic” when I started watching, but I loved Lucy, Ricky, Ethel, and Fred as much as my parents did. And you can bet I’ve already shared my favorite scenes with my own three kids. Whether it’s Lucy and Ethel trying to keep up with a fast-moving chocolate assembly line (shown here), Lucy animatedly stomping grapes in Italy, or watching the trio of Ricky, Ethel, and Fred fall into chaos when Lucy announces she’s in labor, there are countless scenes that leave us breathless with laughter. Just like they did when I watched with my parents years ago.

Quote to Remember:
I didn’t tell a soul, and they all promised to keep it a secret. – Lucy Ricardo

Liz’s Pick
If you’ve never watched Taxi, do it. Now. You’re going to look at every single person in the cast and go, “wait…he was in this?” The ensemble of Danny DeVito, Tony Danza, Judd Hirsch, Jeff Conoway, Marilu Henner, Christopher Lloyd, Carol Kane, and of course, Andy Kaufman is pure perfection, and the comedy still holds up today. Plus it’s so fun catching cameos from the likes of Rhea Pearlman, Jeffrey Tambour, Ernie Hudson, Wallace Shawn, Mandy Patinkin, Martin Mull, Tom Selleck…pretty much anyone funny from that era went through Sunshine Cab Company at some point. Latka and Reverend Jim forever.

Quote to Remember:
If you find yourself in a confusing situation, simply laugh knowingly and walk away. – Reverend Jim

Stacie’s Pick
Perhaps my love for this hilarious show was a foreshadowing of my long career in various media, from television to digital. I never made it onto radio, though, and will always be a little bit sad about that, having grown up watching the WKRP crew. Every single character was memorable and wonderful, and nobody could have done Dr. Johnny Fever like Howard Hesseman.

Quote to Remember:
As God as my witness…I thought turkeys could fly. – Mr. Carlson

Nicole’s Pick
First of all, A Different World starred one of my favorite Huxtable kids: Denise. She was daring, sweet, funky, and fallible, which made her seem like a real teenager growing up and trying to figure her way through the world. Of course, the show also had tons of funny characters (who were people of color!) and plenty of shenanigans, making college life seem like lots of fun—and something to which I should look forward. Plus, Tupac! Check out his cameo in the clip above.

Quote to Remember:
Will you? Will you Whitley take me to be your lawfully wedded husband? For richer, for poorer, in sickness & in health? Baby, PLEASE! – Dwayne Wayne

PJ’s Pick
I might have been too young for Cheers when it premiered in the early 1980s, but I have vivid memories of my parents watching it during its first run. Perhaps it was my subconscious desire for everybody to “know my name” that influenced my decision to attend college in Boston. Or maybe it was a desire to sit and have a beer next to Cliff and Norm, just once. And by the way, if you talk to Bostonians about the Cheers Beacon Hill Bar where the exterior was shot (the name was changed from The Bull & Finch in 2002) they’ll tell you maybe to skip it. “It’s overpriced, it doesn’t look like the set, and no one actually knows your name.”

Quote to Remember:
Everyone in the Swiss Army owns a Swiss Army Knife. That’s why no one messes with Switzerland. – Cliff Clavin

Stephanie S’s Pick
There was a time in the early eighties when I wished my name was Cindy. Mostly because I wanted to be the baby sister of Marcia, Marcia, Marcia (see the clip, above!) but also because I loved those ponytails. These days, I’d still happily welcome an honorary membership in the Brady family, but more for the added benefit of having a cool housekeeper like Alice around. Also, some of those clothes are coming back in style. Bellbottoms, anyone?

Stephanie M’s Pick
I loved watching this show despite the fact that most of it was probably over my head at the time. But I still knew it was  something special if only for the introductions to Thomas Hayden Church and Tony Shalhoub. How could you watch this and not want to visit Nantucket? If you start watching back episodes on Hulu, be sure to catch the “big sandwich” episode which is still a classic. (Hint: Season 6, episode 6.)

Quote to Remember:
This is Nanucket, it’s not San Francisco. We are a simple people. We fish our waters, we till our lands, we eat a big sandwich. – Brian Hackett

Kate’s Pick
Confession: I would sneak episodes of Charles in Charge at friends’ houses after school and was, of course, fascinated by life in the Pembroke house. It was always, always chaos. But Charles could handle it. I mean, what kid in the 80s didn’t want him (or Buddy, he was pretty hunky too) in charge of their days and their nights? Plus, Chachi!

Quote to Remember:
Charles has a lot on his mind. I, on the other hand, have nothing on mine. – Buddy Lembeck

Kristen’s Pick
I only recently discovered this 1980 BBC TV mini-series version of Pride and Prejudice, which was one of Colin Firth’s first major gigs.Trust me when I say, he makes a most excellent Mr. Darcy, indeed. And yes, I know that everyone else here is going with sitcoms from their youth. But I love getting to discover another one of those period piece dramas that I always adore, even if it’s just totally new to me. And even if it’s about as old as I am.

Quote to Remember:
My feelings will not be repressed. You must allow me to tell you how ardently I admire and love you. – Mr. Darcy

Staff Pick, because, THE TWILIGHT ZONE!
If your older kids or tweens think that Goosebumps is creepy, it may be time to introduce them to the original Twilight Zone episodes. Yes they’re in black and white, and the special effects are nothing even close to Guardians of the Galaxy. But that Burgess Meredith episode about a bookwork surviving the apocalypse still stands up. Eye of the Beholder (above) still freaks us out. And hey, it’s fun to see Shatner in episode 43, “Nick of Time,” which isn’t quite as scary as his monster on the plane episode but it definitely makes you think about small town diners in a whole new way.

Quote to Remember: You unlock this door with the key of imagination. Beyond it is another dimension – a dimension of sound, a dimension of sight, a dimension of mind. You’re moving into a land of both shadow and substance, of things and ideas. You’ve just crossed over into…the Twilight Zone. – Rod Serling

Thanks to our sponsor Hulu for bringing back so many fantastic memories for us with all this great entertainment. Visit the Hulu library for a full list of classic shows available and fun new ones too. New Girl, anyone?