The Princess and the Pony: A perfect princess book for a new generation 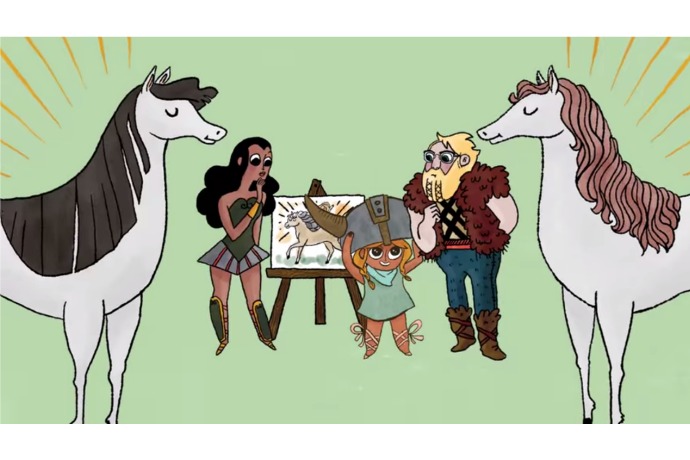 When you think of a princess book, and what the lead character wants, what springs to mind? Classically, the story would be about meeting her true love or escaping her horrible life to live in a luxe castle. Then we moved onto more modern princess books including my favorite, The Well at the End of the World, in which the princess demonstrates that beauty isn’t everything, and kindness, loyalty, and good math skills matter more. Well now there’s comic artist Kate Beaton’s brand new The Princess and the Pony, just out today, which brings a fantastic new twist to the genre. And a whole lot of humor.

And no, it has nothing to do with the 2011 straight-to-video film of the same name, if you were ever forced to sit through that.

Related: Our children’s favorite books for ages 2-12: Lots of ideas for summer reading and beyond

I knew this book was something special from the moment we meet Princess Pinecone, who lives in a kingdom of fierce warriors all armed for viking battle (or dressed for some kind of cosplay convention). Her birthday is coming up and she’s tired of getting cute fuzzy sweaters. What she really wants is a big strong horse to ride into battle herself — only her warrior King and Queen parents don’t quite get the memo, and instead give her the funniest looking little roly-poly pony “whose eyes look in different directions. (But only sometimes.)”

He eats her stuff, he’s inappropriately flatulent, and he’s not exactly about to win her any battles, let alone respect with the other warriors.

Pinecone is not happy.

I asked my eight-year-old what she thought the lesson was, and she came back with, “don’t judge a book by its cover.” Pretty good analysis considering that while the cute (if strong-willed)) little princess wants a big, strong battle-ready steed; in a wonderful twist, the warriors really really like the pony. And cute fuzzy sweaters too.

The other thing that’s terrific about this book is that the princess is (wait for it…) not white. On our most recent episode of SPAWNED with Kristen and Liz where I actually picked this book as my Cool Pick of the Week, Kristen pointed out to me that 3% of children’s books feature lead characters of color (edited to clarify: The statistic is 3% of all children’s books published in 2013 featured any Black characters) which is a shockingly low number. Princess Pinecone, judging from the looks of her parents, is clearly biracial, but it’s not mentioned, it’s not used to make any kind of point or teach a lesson, nor is it even relevant to the story in any way.

It’s just…what it is. And how things are today, and how our kids are starting to see the world. It’s beautiful.

With two grade school children, it’s not that often that I get a picture book sent for review that my kids ask me to keep instead of donate. This one, by all accounts, is a keeper.

And hey, there’s a little something in here for parents too. Or at least those of us who have ever felt that we totally bombed our child’s dream birthday gift. Happy endings all around!

Find Kate Beaton’s new The Princess and the Pony today at our affiliate Amazon, or your local independent bookseller. It’s recommended for preschool through about 8 which seems right, but even younger readers will like the funny pictures and hidden humor through the illustrations.