The Story of Diva and Flea: 2 of our favorite children’s authors/illustrators team up and the results are wonderful. 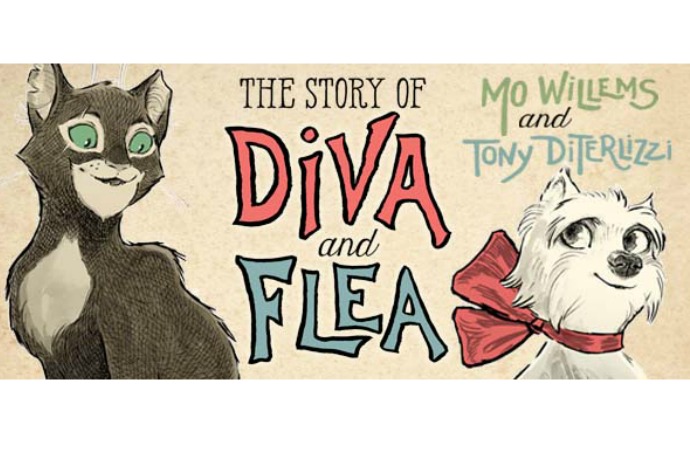 At very first glance, the cover of the upcoming The Story of Diva and Flea cues some sort of classic French picture book. And then I scanned down to the author credit: As told & shown by Mo Willems and Tony DiTerlizzi.

That’s when I knew, whoa. This isn’t going to be your ordinary picture book.

In fact, it’s not even a picture book at all; it’s a sweet, funny early-grade chapter book about a pampered little Parisian dog who comes to befriend a French alley cat and open one another’s worlds in surprising ways. And indeed it’s peppered with plenty of great illustrations: beaux arts Paris apartments, charming storefronts, Notre Dame gargoyles, and “the tower so tall and so pointy that it could cut a cloud in half.”

If you’re familiar with Mo Willems’ pigeon and piggie books (and who isn’t by now), the story is far more sophisticated than you might expect, but with plenty of that self-referential, wry humor that reminds us just how well he has always known the minds of kids — or in this case, domesticated animals who pretty much think like kids.

And if you know Tony DiTerlizzi’s The Spiderwick Chronicles, or his rendition of our favorite Halloween-time book, The Spider and the Fly, it’s not nearly as dark or as creepy, with stunning illustrations and fantastic design choices right down to the typeface and chapter headers that make the book feel elegant and absolutely timeless.

It’s like a new Disney movie waiting to happen.

I read it over dinner last night to my third grader who is probably at the top of the age limit for this, and yet was utterly charmed. My fifth grader thought she was “a little too old for it,” and yet she stayed for every last word.

They laughed out loud as Flea tried to figure out just what Breck-Fest might mean, and how he enlightens the more insular puppy Diva a tale called “The Story Where the Man Roasts Whole Chickens and Could Learn a Thing or Two About Sharing.”

As always, I just love how Willems never talks down to kids at all; a typical children’s author might call out names of the Eiffel Tower or the Metro in an attempt to “educate.” But nope. He knows that children are smart enough to figure out what Flea means by the giant rooms on wheels underground that suddenly appear and release large groups of people.

And if they don’t figure it out, well that’s what parents are for.

The Story of Diva and Flea is nothing short of charming. I don’t think I’ll be the only reader hoping it’s just the first book of many about these two wonderful, mismatched friends.

The Story of Diva and Flea by Mo Willems and Tony DiTerlizzi is on preorder now from our affiliate Amazon, shipping October 13. Or find it then at your local independent bookseller.