19 cool Rey Star Wars toys and gifts: She might not be in Monopoly, but she sure is here. | Spawned episode 28 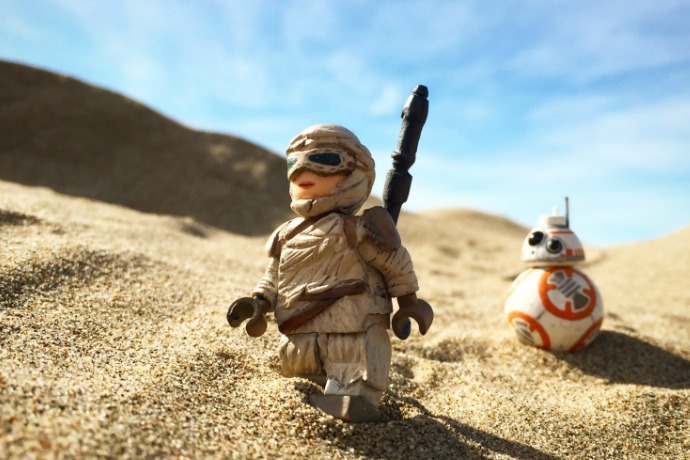 We’ve been super frustrated with the lack of Star Wars toys for kids featuring Rey. Not just because she’s a woman, and all of our kids — male and female — love her, but uh…she’s the hero. How the heck do you make a Star Wars Monopoly set or a Star Wars 6-piece Action Figure set “with all your favorite characters” but not the main character of the entire movie?

Even JJ Abrams doesn’t get it.

We discussed the issue on this week’s Spawned Show: Where is Rey? — especially Mike Adamick’s great post about the missing Rey figure and why Rey is not a hero for little girls.

I talked about finding my daughter one of the few LEGO Rey sets still available before Christmas, and Kristen pointed out that the fact they were being scalped on Amazon by third-party sellers at insane prices should be a cue to the toy manufacturers that there is in fact a market for Rey — if not all female action figures.

In the course of the conversation, we came up with the idea to search out cool Star Wars Rey toys and gifts, both from the big manufacturers and smaller fan art creators, and list them here. So that’s just what we did.

Take a listen to the spawned show — just click this link to go to iTunes or Soundcloud, or you can listen directly right below. Then  check out all the cool Rey toys, artwork and clothing for your kids out there. (As in, just the cool ones; not the crappy ones where her face looks creepy, even if they’re officially licensed, blah blah blah.)

Because our kids could have far worse role models then a butt-kicking, Speeder-riding, spacecraft-commandeering, force-wielding good guy who just happens to be a gal.

(Find other links to topics mentioned on the show at the bottom of this post.)

My daughter’s still playing with it two weeks later. Good sign. It’s actually a fun little set, and you know kids — when she’s done battling the First Order, she’ll move onto other minifigs in our collection, like Smeagol and the dude with the octopus over his head.

This Etsy shop is packed with wonderful handmade fan art geekery including these, which happen to be great together.

Our readers went nuts for these awesome printable zentangle coloring pages we found last week, featuring Rey on her Speeder, BB-8, and your favorite droids and “junker” spacecraft. Sales are helping the artist pay for college.

We are flipping out over this photographic art print — the kids’ room? Or ours? We think maybe she’s headed off to scavenge for more cool Rey toys, but who knows.

You do need the Disney Infinity Starter Set (Anakin Skywalker and Ashoka Tano) to get going, but when you do, add in this set which includes the Rey and Finn figures and a Web Code Card to bring them into the action.

Our girls are dying for these!  We can’t entirely blame them.

If you’re a DIY-er, we know a lot of kids who would love this palm-sized, soft version of Rey in their rooms or dangling from their backpacks.

Taking a pretty transparent page from the genius artist behind TreeChange Dolls, which repurposes old Bratz dolls into something more…aspirational, we found an artist doing the same for everyone’s favorite Star Wars Episode VII heroine.

If you’re a DIY-er, this cool 8-bit style pattern will make some nifty wall art. For a baby’s nursery perha

Not all kids need 3-D action figures to spur their imagination. We know a few kids who would really dig this little Rey.

The official version of this is a little…meh for us. We like this fan interpretation and while yes it’s computer generated, it’s evocative and pretty cool.

My girls would flip for this skirt made from the official licensed Fabric by a smart Etsy seller. You can also find all kinds of fun Star Wars Rey fabric and make something yourself if you’re crafty.

I really love how we see the evolution of heroes and their Speeders, into which Rey fits right in perfectly.

Just laminate her and she’s protected from First Order jerks and accidental falls from the top of your child’s bunk bed.

This is the big, big, big purchase of the bunch, but it could be worth it if you’re already thinking ComicCon or Halloween 2016. Since the “official” Rey outfits are pretty junky, we’re smitten over this carefully handmade work of art. Commission one in a kid’s size for a really special gift.

Other links from Spawned episode 28: Where is Rey?

-One of the strangest new tech items to come out of CES: The Smart Bra.

-Mike Adamick op-ed: Rey is not a role model for girls

-Liz’s cool pick of the week: The Telestrations game

As always, thanks for listening! If you have questions, comments, thoughts, good jokes, email us any time at spawned@coolmompicks.com, or use hashtag #spawnedshow on Twitter and Facebook.

✨📱✨Kids and social media get such a bad rap