The SodaStream Power sparkling water maker: Is it really worth it? 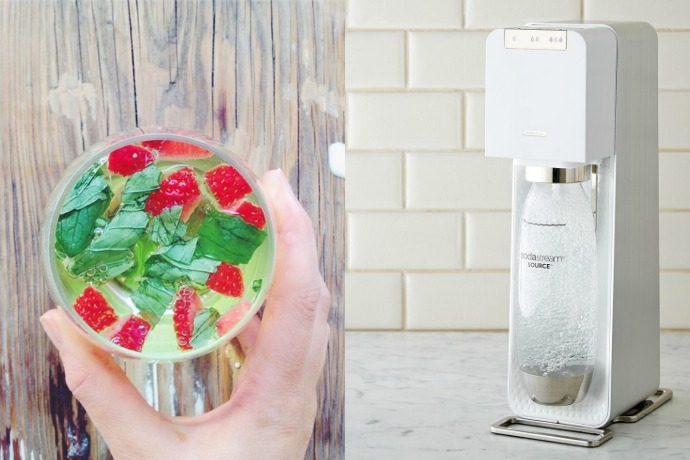 I admit I have always coveted a SodaStream ever since I tried an earlier model at my parents’ house. However theirs seemed pretty big to me, and I live in a small apartment, where we’re supposed to subscribe to the rule about not owning single-purpose appliances (bread makers, panini presses) to cut back on clutter. But since becoming addicted to a different company’s fizzy water maker — until it fizzled out and was entirely discontinued — I leapt at the chance to try out the new SodaStream Power.

Oh, was it worth the wait.

The SodaStream Power is way sleeker than I was expecting, with a slim footprint perfect for smaller spaces and a nice modern design created by Yves Béhar. (What, Karim Rashid wasn’t available? Kidding.) But the looks aren’t the best part; you basically just fill a bottle, pop it into the machine, hit one of three buttons depending on how much fizz you like, and in about 6 seconds from start to finish  — carbonated water.

The other best part that surprised me, besides the speed — it’s so so quiet! As in, you could make water with a sleeping baby on your chest and totally not wake her.

Now, one caveat is you have to be sure the bottle gets up in there really tightly, or you could have a teeny trickle of leakage as the machine finishes its cycle. Not that that’s a huge deal; it is just water after all. Also, the reason it’s so fast and easy is that it runs on electricity. So basically, you’ll need a free plug nearby.

Of course all this awesomeness comes at a price. Pro tip: William-Sonoma sells the SodaStream Power at $149 with free shipping, but ignore their suggested price $180 claim which is total bull and I hate that. SodaStream’s own site suggests $149, so that’s the price.

If you want to save some money, the SodaStream Source might be more your cup of tea, and I found it as low as $91 on Amazon. It’s got a plastic construction that doesn’t look quite as premium to me if that matters to you. And it doesn’t run on electricity which is both a pro (no wires) and a con (more room for human error so your guests will inevitably screw something up).

As for me, I’m super happy with the SodaStream Power, and the ease of use means I’m getting way more use out of it than I ever would have thought. I am already wondering who I can buy one for as a gift.

To make things more fun, try out the drink recipes on the site, though I use real fruits and syrups and not the company’s own sparkling drink mixes. I actually have yet to try them —  the reviews are all over the place — but I’m open to recommendations if you have any.

As for me, I’ve been blending with a touch of Torani syrup that we have around for coffee; and for something really delicious, I seriously recommend P&H Natural Soda Syrups which make the best ever homemade cream soda. But honestly, just play around with whatever you already have on hand, boozy or not.

Now as fun and convenient as it is, the SodaStream is definitely an indulgence. It’s not for those of you who only serve Pellegrino a few times a year when company comes over, or if you’re firmly committed to your diet-whatever of choice. But if you’re like us, drinking it every night with dinner or blending with orange juice for a DIY Orangina for the kids, it is pretty awesome and will save you a lot of money in the long run.

I even find I’m drinking more water overall, which is always a good thing.

Now if only it made paninis, too.

You can find the SodaStream Power shown here from Williams-Sonoma, or the SodaStream Source from Amazon, which are both affiliates. Find more info about accessories and other options at the SodaStream website. Thanks so much for the company for sending a unit to CMP for review consideration. We are toasting you right now.

One of the highlights of my week was chatting with