Fantastic Beasts movie review: The magic is back, but is it okay for young kids? 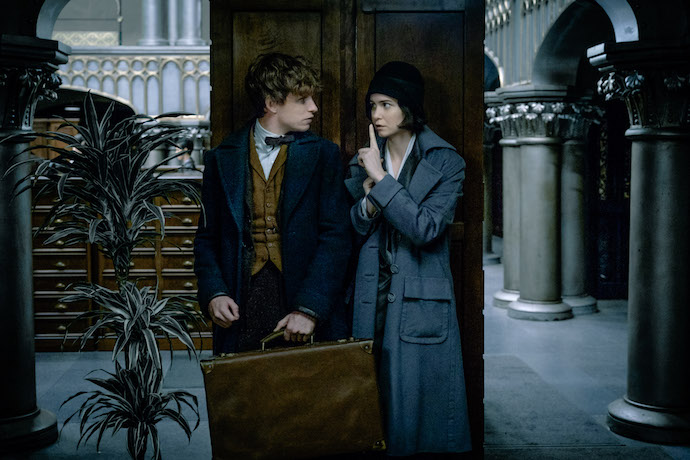 We Harry Potter fans have waited very patiently. As in, it’s been five years (yes, really) since Deathly Hallows Part 2 came out. But friends, Fantastic Beasts and Where to Find Them is just out in theaters, living up to the magic we expect from J.K. Rowling’s universe in every way with blow-your-mind imaginative worlds, multiple layers of meaning that will spark interesting conversations with your kids, outstanding performances, and some impressive action scenes that will truly thrill.

I still remember that breathtaking feeling I got when I first saw the grand hall at Hogwarts and the shops on Diagon Alley, and it’s the same feeling with the reveal of the Ministry of Magic in 1920s Manhattan, the female wizards’ enchanted apartment, and the amazing, fantastical world where the magical creatures live.

But production values aside (which are extraordinary), Fantastic Beasts really manages to capture that brilliant whimsy of the original movies, while adding in some very dark nemeses along the lines of the later films.

So does that make this one okay for young kids?

Well, as the parent of one very nervous little moviegoer and two “we’ll pretty much watch anything” kids, here are my thoughts on just who will best enjoy the newest theatrical edition to the Harry Potter collection.

(And I’m going to be intentionally vague here, because I really don’t want to ruin any of the magic for you.)

Newt Scamander (the delightful Eddie Redmayne) is a magizoologist, whose name you may recognize as the author of one of the school books mentioned on the required reading list for Hogwarts students. He’s come to New York from London to check out some more magical beasts, a good 70 years before anyone had ever heard of Harry or Hermione. On arrival, he bumps into a No-Maj — the American term for Muggles — which causes some of of Scamander’s magical creatures to break loose, causing varying levels of chaos.

The chaos ranges from hilarious — the kleptomaniac Niffler, who looks a bit like a platypus, is laugh-out-loud funny — to Marvel-level destructive. This is where I think small children who are easily scared may have issues.

The film earns a PG-13 rating, and I think that’s in part due to the more intense action sequences, and the darker subplot about Percival Graves (Collin Farrell is such a good villain!) who is bent on discovering the identity of a child in New York believed to be an Obscura — a wizard who’s been shamed about their identity and forced to hide it so long that a very powerful dark magic overtakes them. That’s the part that’s legit scary.

Related: Kubo and the Two Strings: Why this film is absolutely worth your time and money

As I mentioned, I have one kid who gets nervous in scary movies. No matter how adorable and fascinating the magizoology of this movie is (and it really is), I can honestly say he wouldn’t enjoy Fantastic Beasts and Where to Find Them because the dark parts are just too dark.

Think of it in terms of Harry Potter and the Goblet of Fire, the fourth movie in the original series, in terms of intensity and that should guide you.

The best tip: If you have younger kids who are dying to see the movie, it’s worth waiting for it to stream so that it’s less intense on your small screen at home. Plus, it’s easy to spot the scary parts when they’re coming, so parents can fast forward through them if you need.

That said, if you have kids who adore Harry Potter and are old enough for the full theater experience it’s just a tremendous spectacle. The storyline of the Obscura should even spark some meaningful conversations about what happens when you try to hide who you really are,  and the problems — anger, doubt, fear — that can come from it.

Even if who you really are isn’t a magical wizard.

Now I will say that Fantastic Beasts wraps up with a rather tidy ending, but this being a world of franchises and sequels, fear not, fans. There’s so much left to look forward to in the movies to come.

If I have any advice, it’s that you go to an early showing, because you’ll be up trading fan theories all night: Who is Leta Lestrange? Is she any relation to Bellatrix? What’s the story with Newt’s older brother? Who remembers Gellert Grindelwald from the books? And then there’s that huge surprise at the end…

I’ve already said too much.

Visit the official Fantastic Beasts and Where to Find Them website, or check Fandango for local times and theaters.