The best group card games to play with the whole family: Game night, bring it. 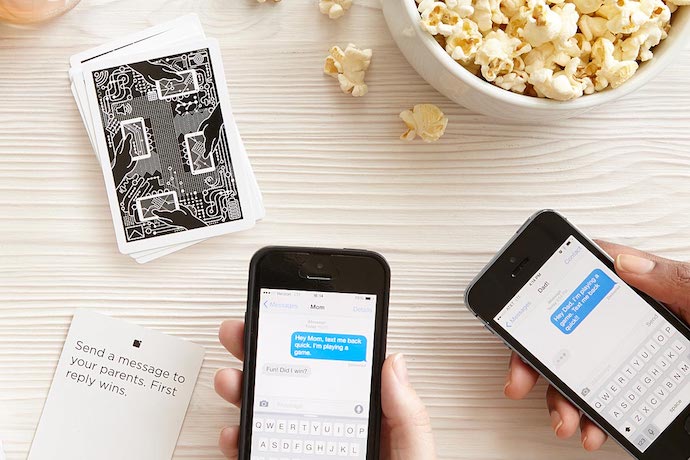 Now that Thanksgiving is in the rearview mirror, it’s really starting to feel like Christmas to me. And as much as I love the shopping and the hot cocoa and the decorations, my favorite part is the parties. Instead of sending the kids to the playroom to watch a movie while the adults hang out this year, I’ve found some really fun group card games that the whole family can enjoy together. From competitive strategy games for the geeks in all of us, to light party games that are more about having fun than winning, these are our favorites.

Of course, you can still send the kids off to play and let the adults have fun with the games by themselves too.

Added bonus: All of these games are all pretty inexpensive (most under $20), they all transport easily (no boards or important game pieces to lose, thankyouverymuch), and they have fairly simple rules so you can jump right in and start playing. Time to pop some popcorn and put your game face on. Family game night, bring it.

Related: Our favorite family board games for 6 or more players of all ages.

The concept of Exploding Kittens is simple: Don’t let your kitten explode. But, doing that is harder than it seems. The cards are cheeky — exploding back hair is an actual attack mechanism in the game — and you use them together to hinder your opponents from achieving their goals. This was the most-backed project in Kickstarter history, and for good reason. It’s a lot of fun to play, for up to 5 people. Add the expansion sets, and 8 more people can join you.

If you’re looking for a fast-paced game you can play in about 20 minutes, Diamonsters is one to try. Everyone from my 6-year-old to his grandparents are loving this game at my house, partly due to the awesome art of the different monster cards and but also because it’s just so simple. Up to 6 people can play this card game that has one easy goal: be the first to collect three of the same monster cards or five diamonds. Once you achieve this, you get a little plastic diamond (get it, diamond-monsters?). The number of diamonds you need to win depends on the number of players. This is a good choice if you’re trying to squeeze in an activity before bedtime.

We love the clever idea behind Game of Phones, where you team up with your phone to beat the other players at the table. If you have screen-obsessed kids, this might be a fun one to try. It’s simply a deck of cards with instructions that might have you scrolling through your camera roll for the best selfie, searching the house for a scavenger hunt item to take a picture of, or using your texting ability to log a response first. If you’re playing with kids, you may need to pull a couple of the more mature cards out of the deck first. But other than that, our only complaint is that it’s a little expensive for just a deck of cards. But, hey, it’s really clever and we’re excited to see what else this indie gaming company comes up with.

My son found the game Timeline at a local toy store while we were on vacation in Asheville earlier this year, and we ended up playing it all weekend long. The directions couldn’t be simpler: Each card has an event on one side (the first step on the moon, the completion of Mozart’s fifth symphony, the discovery of penicillin), and the historical date on the flip side. Without looking at the dates, you have to guess where that card goes in the timeline you’ve created as a group. This is much, much harder than you might think. And when you add expansions like Discoveries, American History, or even Star Wars to the mix, it gets really fun.

I am a little bit obsessed with Codenames, and I’m not the only one. It won best game of the year this year, and now they’ve released Codenames Pictures, which I cannot wait to try (Santa, are you listening?). Any number of people can play, as long as you divide into two teams with team captains. The captains draw a card that indicates which images from the grid each team is trying to guess. Then they give one-word clues to get their team to nab the right cards. But beware, there’s a card marked as the assassin, and if your team guesses that card, say, through bad clues, the game ends immediately and you lose. Oof.

When Liz discovered the Not Parent Approved game, we were pretty geeked. It’s the same concept as Apples to Apples — a “judge” plays a card with a question on it, and the rest of the players have to choose an answer card from their hand that best fits. But this time, the answers are all silly, irreverent, or downright off-color, a la Cards Against Humanity but, you know, PG(ish). Naturally, there are plenty of fart and poop jokes here, so your kids are guaranteed to laugh their heads off with this one.

Related: The 2016 best board games of the year from Spiel des Jahres.

My kids have really enjoyed the entry-level strategy card game Machi Koro, which I bought because of the cool art. (Great job, IDW Games.) The concept behind the game is that you’re building a Japanese town, and the villagers want a train station, amusement park, radio tower, and shopping mall in their city. The first person to build all of these — which you do by building cheaper (money producing) bakeries, wheat fields, factories, and so on — wins. There’s a random element that comes from rolling the dice, and you can thwart your opponents by stealing their money. Up to 4 people can play with the basic edition, but the Harbor and Millionaire Row expansions let you add an extra player.

If the Dominion card game looks a little geeky, that’s because it is. But it’s also one of the most popular strategy card games for older tweens and teens, with dozens of expansions available. Each card in this deck gives you different abilities to earn points, and your goal is to create the most efficient hand of cards possible. Not all of the cards are used each time you play the game, which means you have endless opportunities to change it up and make it feel like a different game (always a sign of good value in a card game, if you ask me). If you’re a very type-A who’ll obsess over getting the perfect hand of cards, you’ll dominate this game.

While Escape the Room: The Secret of Dr. Gravely’s Retreat isn’t a traditional card game, it’s one my family has really enjoyed playing lately. Escape the Room experiences have been a huge trend (which we recommended in our Holiday Gift Guide this year too), but they’re a little pricey for an average weekend night. The at-home versions from Think Fun have been surprisingly complex, with a variety of clues, codes, knot puzzles, and other tricks that have made it just-hard-enough to figure out the mystery. Everyone works together to solve the puzzle, which is a nice break from constant competition. For under $20, I’d definitely recommend trying this out together before investing in an expensive night out. If you love it, even more reason to go do the real deal.

Thanks to IDW Games for sending us a sample of Diamonsters, and to Think Fun for sending a sample of Dr. Graveley’s Retreat. We ended up buying our own copies of your other games because these were just so great.