Wow, It Really Is a Super Tuesday. 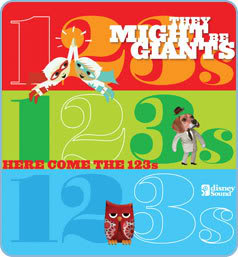 Some days just get people excited. October 10, 2007 was one of those days in our house, because that was the day Radiohead released their new album online. And as exciting as it was, that much-anticipated day was nothing comparison to today, Feb. 5, 2008. No, not because it’s Super Tuesday

And no, not because it’s Fat Tuesday.

Duh. Because it’s Tuesday, Feb. 5th, the day that They Might Be Giants release their new two-disc, CD/DVD combo Here Come the 123s.

This follow-up to Here Come the ABCs is, obviously, about counting. So 90% of the songs are about numbers, with tracks like Zeros (our favorite), Number Two (not what you think it’s about), Apartment Four (Beatlesque), and so on. 27 new songs + 24 videos=51 new pieces of music, the sum of which is that They Might Be Giants is now quite possibly better than they’ve ever been. Even in those Birdhouse in Your Soul days.

Check out samples here. And while you’re at it, feel free to eat some etouffé. And vote if there’s voting in your state. It’s a big day all around. –Laura