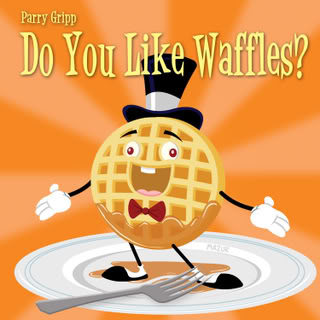 After listening to the 24 bite-sized songs on Parry
Gripp’s Do You Like Waffles?,
I’m pretty certain he could come up with a rockin’ song about any food product out there. In fact, this album was born
after Parry tried his hand at commercial writing for some sort of
dip-able waffle product. But, don’t fear: although the lyrics will have you singing about donuts, hot dogs and even bran flakes, the music is a mix of fast, fun and head-bopping rock and pop with a sprinkling of punk, techno and even country twang.

Writing quirky punk-rock songs is something I’ve known Parry to do with his “nerd
rock” band Nerf Herder. Now, instead of creating the theme song for Buffy the Vampire Slayer, singing about Mr.
Spock or making silly YouTube music videos (Hamster on a Piano, anyone?) Parry has created a kid-friendly CD that is as addictive
as a hot plate of nachos.

Almost all the songs
run under one minute long which is perfect for my kids’ short attention
span. We’ll turn on this CD whenever we’re in the car and sing loudly
and without embarrassment to such lyrics as “one donut a day, and everything’s gonna be okay”. So, if the minivan is rocking, fear not: we’re just rocking out with Parry Gripp. –Christina